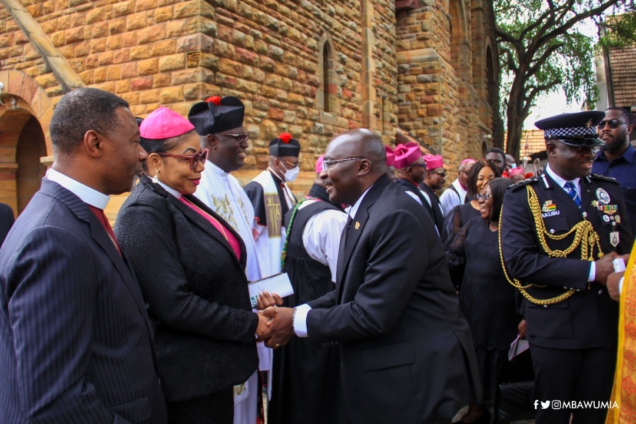 The Anglican Church and the British High Commission on Friday, September 16, organised a special service dubbed “Thanksgiving Service for Queen Elizabeth” in honour of the late monarch.

Queen Elizabeth II, who died last week after reigning for 71 years, is being mourned by Britain and Commonwealth States.

In honour of the Queen’s role as the titular Head of the Anglican Church, the Church, in collaboration with the British Council, organised the service, with a number of dignitaries, including the Vice President, Dr. Mahamudu Bawumia, in attendance.

The Vice President was there to represent President Akufo-Addo.

Speaking at the ceremony, Dr. Bawumia extolled the Queen for her impactful leadership to her people and the Commonwealth, describing her as “an embodiment of virtue, courage and affection.”

“Her Majesty the Queen showed remarkable leadership in an era marked by strong anticolonial and independence waves in the African continent (1950s and 60s). It is, therefore, not surprising that under her reign the Commonwealth saw such a huge transformation,” Dr. Bawumia said.

“Her Majesty had a yeoman’s task of overseeing the transition of Great Britain from the tensions of the post-World War II era, especially the Cold War, playing an instrumental role in granting independence to former British colonies, one of which is our beloved Ghana, and contributing immensely to the relative peace the world has enjoyed since the end of the second world war.”

While expressing the deepest condolences of Ghanaians to His Majesty King Charles III, the Royal Family, the people of the United Kingdom and the entire Commonwealth, the Vice President also prayed for peaceful rest for the Queen.

“Ladies and gentlemen, as we celebrate a great woman who was an embodiment of virtue, courage and affection, it is my prayer that God will accept her gentle soul to a peaceful rest.”

The Bishop of the Anglican Diocese of Accra, Rt. Rev. Dr. Daniel S.M Torto, in a sermon, urged Ghanaians to emulate the dedicated service the Queen was noted for.

“Let us learn to serve. We must be of service to our nation. Do not wait for someone to begin before you join. Be of service to yourself, your family, and the nation at large,” the Anglican Bishop urged.

DISCLAIMER: The Views, Comments, Opinions, Contributions and Statements made by Readers and Contributors on this platform do not necessarily represent the views or policy of Multimedia Group Limited.
Tags:
Anglican Church
Bawumia
British High Commission
Queen Elizabeth II