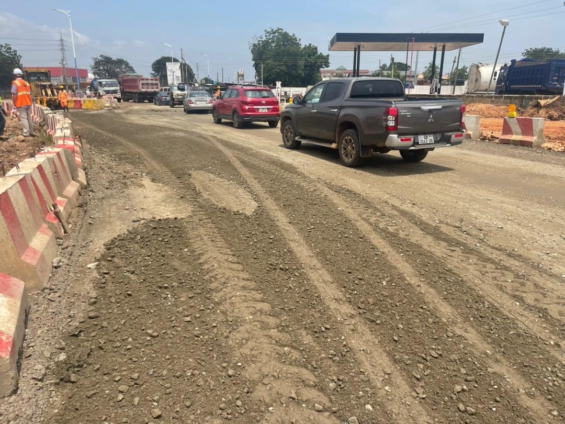 At the beginning of this week those of us who live in Prampram and other communities in the Ningo Prampram district, and are regular commuters on the main Dawhenya-Kpone barrier road, flooded social media with complaints of unbearable vehicular traffic on the stretch.

Other commuters who happened to have driven into the situation, especially on the weekend and had to spend needless hours trying to make the trip on either end of the stretch, were left exasperated. A friend of mine who was on his way to a funeral in Ningo, another fishing community next to Prampram, drove into the traffic around 10 am and only managed to get to his destination by 2 pm.

He arrived only to find more empty chairs at the venue than most mourners. He took to Facebook and expressed his revulsion against a situation that should not have happened in the first place. Others shared similar sentiments.

A week leading up to that weekend, I and many other commuters were subjected to the same terrible situation for five days. My wife was out of town and I had to drop the boys at school and later pick them.

A rather innocuous, short and fun trip with them almost became a nightmare. We spent more than an hour trying to make a journey that should ordinarily last about twenty minutes. Other parents endured the very same MADNESS on the road. That road is notorious for vehicular traffic but ongoing construction to ameliorate the situation has rather compounded it. Not that users of the road are not ignorant about the inconvenience an ongoing construction works cause, but this very one should not have occurred in the first place.

The diverted portions were littered with potholes and the proper thing to do when one got there was to slow down and cross. That eventually had a spillover and splashed the entire stretch, going beyond the Prampram junction and even the Kpone barrier.

Unfortunately, the construction company BHM Construction International (UK) and its local representatives, did not have the decency to address the situation. It was as if they enjoyed seeing motorists safer in the situation they ought to be fixing. Then on Sunday night and early Monday morning, unhappy motorists started calling out the company for its lack of sensitivity, unprofessionalism and cruel construction practice. Motorists appreciate the ongoing construction works and the tireless shift the workers continue to put in, but we are opposed to the same works being used to inflict punishment on us.

On that same Monday, they started filling the potholes. But the nature of the filling means once the rains hit, and we are in a rather unusual raining season, the mess will resurface and all the work done will come back to zero. What they need to do is to seal the places to ensure the volume of trips on those portions does not create another set of potholes. For a country that has a notoriety for doing shoddy patchwork instead of long-term fixing, I want to believe BHM will allow its global reputation to guide it to do the right thing.

Talking about shoddy patchwork, the Kwame Nkrumah Memorial Road aka Tema Motorway is a prime example. It is safe to say one’s biggest insurance on that stretch is one’s faith in the Supreme Being. Else, I do not see how motorists survive on that stretch with the number of potholes that continue to expand but are not being properly patched.

Even the ones that were poorly done at the instruction of ENGINEERS are not only back to where they used to be but look more dangerous than ever. Sometimes I wonder whether those empowered to fix the stretch either pretend not to see the potholes with the exposed metals, or use a different highway with all the proper features that we are not aware of.

Recently when some of us screamed about the threats those potholes pose to our safety, some workers were hurriedly dispatched to patch some of the potholes. It was better they had left things the way they met them; because the very places they claimed to have patched for which reason commuters were trapped in unannounced traffic, are posing threats to lives.

Maybe they want us to scream. Again. Before they can get back to fixing the problem.

And talking about the motorway, has anyone seen that the wealthy in the society continue to encroach on the lands around the dam? These persons who are seemingly powerful and above the law and have managed to slice massive portions of the motorway and for which reason the planned expansion appears to be hanging on a wet and thin rope have extended their greed to the dam site.

Their house designs are ready and just waiting for contractors to begin work, so they build their mansions next to the water. Not even the imminent threat of building around waterways scares them because they believe whatever status they have will fix things. Let the rains hit for the dam to overflow its banks and enter their homes, these same characters will take to social media and either accuse government or the assembly under which they fall, for not protecting them from a problem they have created.

We have several examples of people who built on waterways despite sound reasoning but are today paying the price. These same people when they are hit with the problem, they have created will be sifting through the pages of their ‘blame book’ for targets.

Then there is galamsey ripping apart the soul of our country with gusto.

DISCLAIMER: The Views, Comments, Opinions, Contributions and Statements made by Readers and Contributors on this platform do not necessarily represent the views or policy of Multimedia Group Limited.
Tags:
Anny Osabutey
Dawhenya-Kpone
Ghana
Prampram