Anny Osabutey: SlapGate – Why should Ghanaians be sweating over Will Smith slapping Chris Rock at the Oscars? 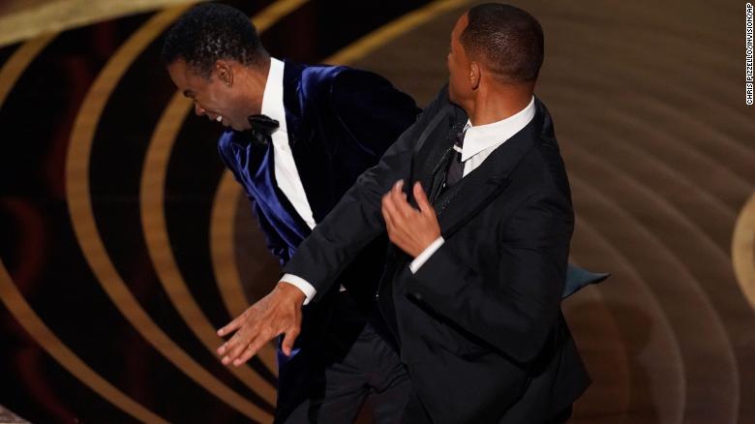 Ghanaian gossip merchants were on Monday called from their brief hiatus to assemble on social media pages especially Facebook for a major assignment, thanks to Chris Rock receiving a hefty slap from Will Smith, at the 94th edition of the Oscars. The assignment was simple; conduct a thorough analysis of the slap and take a position, defend it with every blood in your bone. Do not suffer fools-let them taste your rage.

With the guidelines for the day’s gossip clearly spelt out, the merchants got busy and for almost the entire day on Monday, in WhatsApp chatrooms, telegram platforms, Twitter and Facebook, they stated their opinions. They then waited for reactions from anyone who had one. One after the other, in the warmth of their sofas, juice and wine in their glasses, kept an eagle eye on each reaction to their posts. The ones that fell short of their expectations received the appropriate reactions, mostly drawing blood in the process. You are either for the slap or against it, one post read. I will sleep here under this post, another person commented on another post.

To start with, I did not watch the Oscars. Like most high-profile entertainment events that are held in different time zones, once the show time happens at a time when I should be enjoying the warmth of my pillows, it will never register in my books. I normally get to know about who won what and who did not win what the next day, mostly from the Ghanaian fashion police footsoldiers, who spend time analysing the clothes of the celebrities at the event, almost deciding which clothes was appropriate and inappropriate on each of the stars.

There are some who genuinely know what they talk about because of their knowledge in the entertainment and fashion space, but others also lack knowledge in fashion but pretend to be experts. You look at their own outfits on Facebook and you wonder if they are the right persons to be offering fashion tips on the outfits of Hollywood stars. Despite that, I love some of the comments under some of the post-they are hilarious, to say the least. I still remember reading a comment from somebody who compared Wesley Snipes outfit to that of Kweku Ananse, or spider, stealing farm produce. People can be savage.

That said, why should Ghanaians be sweating over Chris Rock being slapped by Will Smith? With all the issues happening in the country, even on the Ghanaian showbiz front, it is the slap handed out to by Will Smith on Chris Rock, arguably one of the best comedians in the world, that engaged the attention of almost the entire country, if what I monitored on social media was anything to go by. First and foremost, I do not condone violence in any form or shape, neither do I also condone a comedian thinking he has the liberty to make jokes out of the health of an individual or people. Will Smith, I understand has apologised. Fair deal.  Whilst I think the two celebrities are household names in most Ghanaian homes, certainly not my village, and so what happened between them would not pass without any commentary on it, for me, I found it rather awkward the anger that it elicited from the various camps who thought both men were either right or wrong. More disturbing was the exchange of personal insults I witnessed under a post, where a Facebooker, boiling with rage, said Will Smith was charitable with his slap and that, if it were him, he would have delivered more than what Chris Rock received. Others commented and labelled him “violent” and “intolerant” especially because this said person is often seen to be picking on people in most of his posts.

“But you are always making fan of political party footsoldiers, but none has slapped you, so what are you talking about,” somebody wrote in response to his comments.  The persona came in with a reaction of his own. Others also followed by posting screenshots of his previous posts, mocking others and accusing them of not behaving like “grown-ups.” The exchanges sparked a long thread and for close to an hour or so, because they are both friends on my page, I had to deactivate my notifications so I could have some peace. Later when I went back to check what new was on Facebook, I saw that others had joined the thread and was spreading like push fire. Somebody hilariously wrote; “from slap to screenshots; shoshia media make hot like the cheeks of Chris Rock.”

Interestingly on the day the exchanges were going on, the same person under whose post the fire was raging, had posted a link to a lorry accident which had claimed lives. The post asked a simple question; how long are we going to allow innocent lives to be lost, or because it does not directly affect us? It had only three comments. Just three.

This is a clear case of the aponkyireni(frog) deciding to sweat for the actions of a lizard (koterɛ) that decides to engage in a pepper chewing contest.

DISCLAIMER: The Views, Comments, Opinions, Contributions and Statements made by Readers and Contributors on this platform do not necessarily represent the views or policy of Multimedia Group Limited.
Tags:
Anny Osabutey
Chris Rock
Oscars
Oscars 2022
Will Smith
Will Smith Slaps Chris Rock At Oscars 2022