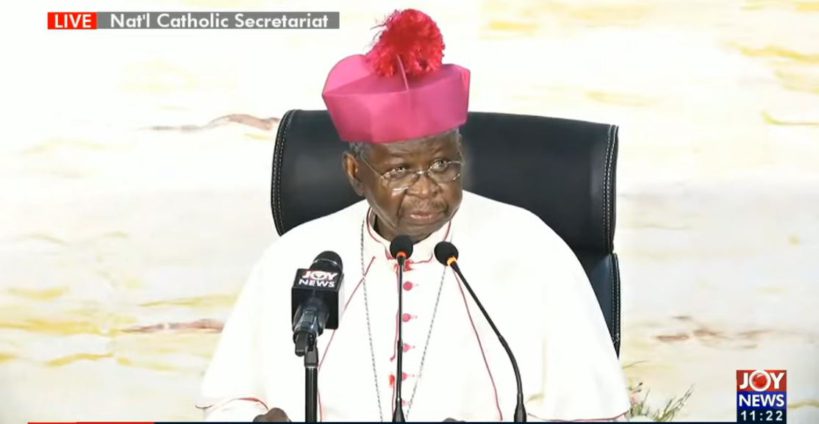 President of the Ghana Catholic Bishops Conference, Archbishop Philip Naameh, is dissociating himself from some claims regarding his position on other religions in the controversial Anti-LGBTQ bill.

The issue under contention was contained in a CNN publication that chronicled the disquiet surrounding the legislation of the draft.

While detailing the condition of LGBTQ+ persons, the international news outlet in an October 8, publication solicited the view of the Archbishop where he communicated the Church’s stance on the matter.

Most clergymen in the country have already expressed their resentment for the act.

However, the Archbishop was quoted to have added another argument which has attracted some backlash from a section of the public.

Expanding his argument based on procreation, he purportedly told CNN that “those who are promoting gays and lesbians are not going to have children at all, and within a short time nobody should be surprised that Muslims will become a majority in this country and declare it an Islamic state.”

A section of Ghanaians has reacted to this, especially when Islamic clerics have joined the Church in solidarity to push for the bill’s passage.

But the cleric said the assertion is false and a calculated attempt to discredit the ongoing push for LGBTQ criminalisation.

“The statement attributed to me is false and does not in any way reflect the actual content of the conversation which has to do with the church’s support of the bill,” he said at a press conference in Accra on Monday, October 11.

“The position of the Catholic Church on LGBTQIA+, which I have stated in several interviews with the media, including Upfront on Joy News and in an interview with Citi FM last week, has remained the same; that, such practices are against not only Christian values but Muslim and Traditional values as well.”

He believes the move forms part of efforts by some persons to “court disaffection and break the force of formidable coalition behind the bill.”

Archbishop Naameh called on all to disregard “the fabrications and distortions.”

“Indeed, all these years, the Catholic Bishops’ Conference has insisted on mutual collaboration among Christians, Moslems, Traditional Leaders and all other Faith-Based Organisations in the country for peaceful co-existence and the common Good,” he added.

Parliament’s Committee on Constitutional and Legal Affairs has received over 120 memos geared towards shaping the bill.

Proponents say they have the overwhelming support of Ghanaians, one of the reasons they are pushing that it be passed expeditiously.

But sponsors of the memoranda against the legislation describe the bill as an endorsement of state-sponsored violence against minority groups and an infringement on their human rights.