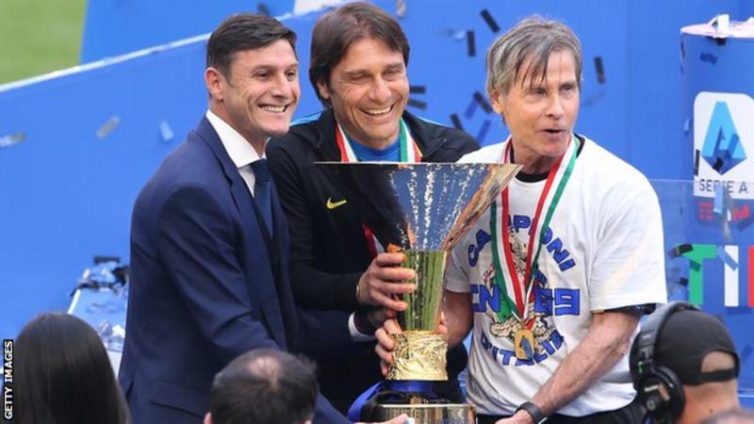 Tottenham is in advanced negotiations with former Chelsea boss Antonio Conte about becoming their new manager.

Conte, 52, will hold face-to-face talks later on Monday, with an announcement possible as early as Tuesday.

The Italian left Inter Milan in May just weeks after winning Serie A.

He won the Premier League and FA Cup at Chelsea but was sacked in July 2018 after a disappointing second year in charge.

The former midfielder also managed Juventus from 2011-14, winning three Serie A titles, and took charge of the Italian national team from 2014-16.

Conte spoke to Tottenham on a number of occasions in the summer as the club looked for a replacement for Jose Mourinho.

However, no agreement could be reached at that stage and, after a difficult and lengthy search, the club went instead for Nuno.

That move proved to be disastrous and was terminated after just 17 games in a brief announcement from the club in the wake of Saturday’s 3-0 home defeat by Manchester United.

‘Conte would benefit Kane and Alli’

The level of concentration and the quality of training will increase under Conte.

Every single player will get that energy jolt thrust into them – if they follow him, that would only do their careers at Spurs well and Spurs well. And if they don’t, he has no problem whoever it is to completely freeze them out, he doesn’t care.

For someone like Harry Kane or Dele Alli, I think that this could actually be good for them because Conte is – despite popular belief – a very good man manager, he is very good at getting players on board with his project.

One of the biggest misconceptions about Conte is that he plays defensive, boring football – that’s just not true.

Conte’s a guy who is defensively solid and sound but his Juventus and Inter sides played some very attractive football. Inter scored over 100 goals two seasons in a row in all competitions under him.

He’s very organised, he’s a system manager, he’s wants things his way and when it works it is beautiful.

They mopped the floor with every single team in Serie A by playing a very organised style of play and they scored for fun.