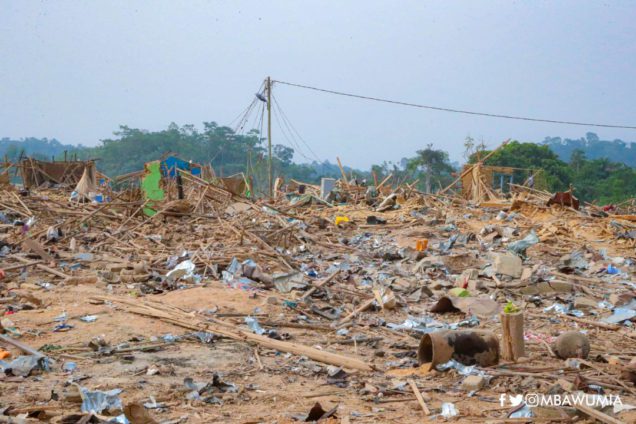 The three-member committee set up to investigate the circumstances leading to the explosion at Apeatse has presented its report to the Lands Minister, Samuel Jinapor.

The document contains findings and recommendations, among other things, to avert the recurrence of the incident in mining communities.

The presentation of the report followed the completion of work by the three-member committee chaired by Benjamin Aryee.

Handing over the document on Tuesday, Mr Aryee expressed confidence in the outcome of the investigation.

According to him, the committee worked earnestly due to how delicate and important the assignment was.

“We were able to cover the period visit the relevant stakeholders. We were able to talk to witnesses to the various incidents. We have come out with this report through the interviews and our observations.

“We believe this report fairly represents the facts of the case. However, we will not preempt what the

Meanwhile, the sector minister, Samuel Abu Jinapor, says his interest is ensuring that the committee’s recommendations are implemented to the latter.

He further noted that the terms of reference of the Aryee Committee is not a criminal investigation; thus, the explosion case is within the remit of the Ghana Police Service.

“What I have been interested in as the Minister responsible for Lands and Natural Resources and for that matter mining, is whether or not, the regulatory regime of the mining as it relates to explosives was adhered to or not,” he emphasised.