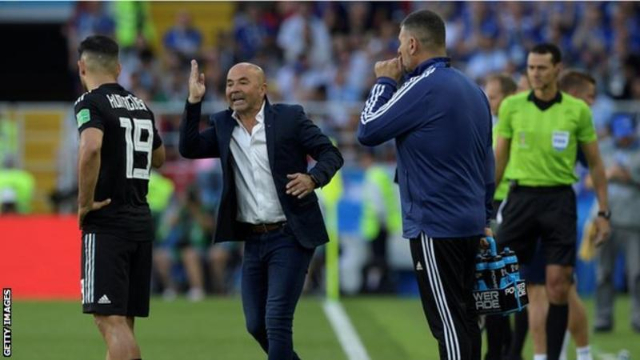 Argentina and manager Jorge Sampaoli have "mutually agreed" to terminate his contract in the wake of the team's disappointing 2018 World Cup campaign.

The 2014 runners-up went out of the tournament courtesy of a 4-3 defeat by France at the last-16 stage.

Sampaoli, 58, took charge of his home country in May 2017 and the team scraped through qualifying.

The team only progressed from the group stages in Russia with an 86th-minute winner from Marcos Rojo against Nigeria.

That came after Argentina drew their first game 1-1 with Iceland before a 3-0 defeat by eventual group winners Croatia.

The loss to Croatia – which started with a dreadful error from goalkeeper Willy Caballero – was Argentina's heaviest defeat in the group stage of a World Cup since losing 6-1 to Czechoslovakia in 1958.

It was also the first time the two-time World Cup winners had failed to win either of their opening two group stage matches since 1974.