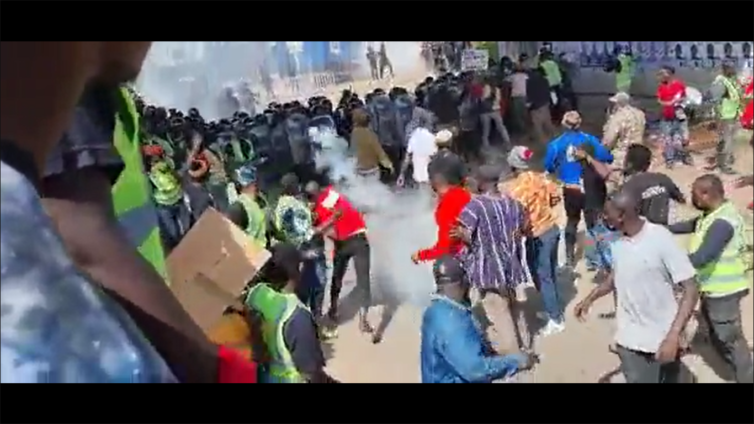 A leading member of Arise Ghana, Edem Agbana, has called for the resignation of the Inspector General of Police (IGP), Dr George Akuffo-Dampare, over the violence which erupted during a protest on Tuesday.

The protest, expected to be a peaceful demonstration, turned violent with police firing tear gas into the protesters.

Although it is unknown what may have prompted the action, it is reported that there is tension on the grounds.

Currently, the Kwame Nkrumah Interchange road has been closed, with no movement from either vehicles or persons.

Videos from the scene show some protestors pelting stones at the police personnel. There were also massive damages to some vehicles, including a police van parked by the roadside.

On the back of this incident, Edem Agbana, who was also at the scene during the chaos has blamed the Police for the violence during the protest.

“The IGP and his people are demonstrating against Ghanaians…I am ready to die for the people of Ghana, but they will take our land and instruct the IGP and his men to kill us.

“As a leader of the demonstration, I take responsibility for the actions of the demonstrators, and that is why we had a meeting with the police hierarchy…I blame the police; it is the IGP who must resign right now. The IGP must tell his men to keep the security of the people paramount,” he told Joy News’ Manuel Koranteng.

Meanwhile, the Police administration has accused the Arise Ghana protestors of hurting and injuring officers deployed to provide security at the demonstration.

“What a shame, we were there to protect you and ensure your safety, but you throw stones at us, injure and hurt us. This behaviour is unacceptable and must be condemned,” the Police said in a tweet.

The Police also picked up three protesters of the ongoing demonstration by Arise Ghana.

The three were allegedly arrested for involvement in what the police described as violence.