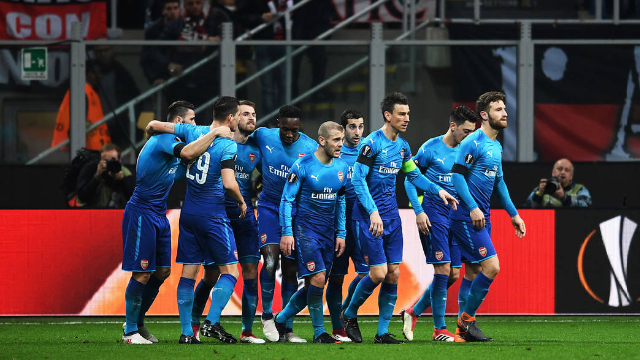 Arsenal put their recent problems to one side as a polished performance at fallen giants AC Milan gave them the upper hand in their Europa League last-16 tie.

The Gunners arrived at the San Siro at arguably the lowest point of manager Arsene Wenger's 22-year reign, yet responded to a run of four straight defeats with a confident and controlled display against their Italian hosts.

Henrikh Mkhitaryan's first goal for the club put the Premier League side ahead, cutting in from the left to fire in with the aid of a deflection off Milan skipper Leonardo Bonucci.

Wenger spoke before the game about his team showing fight without compromising their attacking principles – and they delivered in a dominant first-half performance.

Aaron Ramsey deservedly doubled their lead before half-time, collecting Mesut Ozil's piercing pass through the centre of Milan's defence to round keeper Gianluigi Donnarumma and tap in.

Milan tried to up the tempo after the break, wasting a clear early chance to pull one back when Giacomo Bonaventura spooned over the bar.

But Arsenal were largely unruffled from then on, limiting the home side to half chances with a solid defensive effort.

The two away goals now make the Gunners firm favourites to reach the quarter-finals after next Thursday's second leg at Emirates Stadium.

"Overall it is important to win, but it is not qualification. We have to finish the job at home. I am happy with the spirit and response we gave," said Wenger.

"We were not in a position to take risks, but we could not be too cautious as you lose fluidity. We defended with resilience until the end."