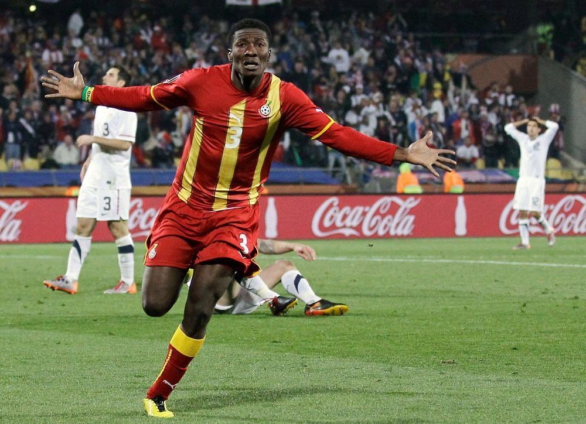 Just 24 hours after stating that he is working around the clock to be fit for the 2022 World Cup, Gyan made a post on social media saying: “I’m the news and go make u keep talking”.

The former Sunderland striker knows the gravity of his words and got the exact reaction he was after. If you need further proof, you are approaching halfway in an article on him a week after the interview with the BBC.

In the interview, Gyan says: “But I haven’t retired yet, I haven’t announced my retirement.” This was the biggest takeaway because it offers perspective on how the player views himself. Essentially, the player has made himself available for selection in case his status was ever in doubt.

Then begs the question, why would Gyan who is the country’s leading scorer with 51 goals still be after more call-ups? Especially when he is now 36 and hasn’t played active football for more than 15 months.

However, this has been the overarching theme throughout Gyan’s career. Time and time again, he’s acted like the victim with a point to prove – this theme became more dominant after the 2010 World Cup.

It’s important to clarify that nobody can stop Gyan from dreaming. He says the World Cup is every player’s dream and he would love to prove himself again. So how feasible is this dream?

A dream far from reality

The last time Gyan played a competitive football game was June 3, 2021, against Uncle T in the round of 64 of the MTN FA Cup. In that game, he lasted for only 33 minutes as he had to be subbed off due to fitness issues. It remains the only match Gyan started during his short tenure at Legon Cities.

Overall, he managed just 80 minutes of league action for Legon Cities and failed to make most matchday squads due to his lack of fitness as described by then head coach Bashir Hayford.

“I have been telling you time and time again to ask him. He comes to the field so you should ask him. Even doctors can’t look you in the face and confirm that your nose hurts, you must tell them what is wrong with you. What I know is that I want him to be fit so I can use him. I have been saying that no coach will get Asamoah Gyan and leave him on the bench, no coach in Africa,” Hayford told reporters after a 1-1 draw with Hearts of Oak when he was quizzed about Gyan’s injury issues.

Gyan failed to make an appearance in the club’s last 9 games as they ended up having to fight the drop for the most part of the season. Fair to say that Gyan’s well publicised return to the Ghana Premier League was quite underwhelming as he ended the season with no goal.

The club and Gyan parted ways ahead of the 2021/22 season and the player has been without a club since. The comments by Hayford highlighted the gap for Gyan when it comes to match fitness.

One year ago, Gyan was more active and in a more controlled environment so we can assume he was fitter than he is now that he isn’t attached to a club. So if a fitter Gyan wasn’t even getting considerable minutes in the Ghana Premier League which is miles off the world standard in terms of intensity, then just imagine the amount of work he has to put in before the World Cup.

The Mundial is in 89 days and the truth is there is no fitness plan that can magically put the 36-year-old back in shape. As things stand, he hasn’t even signed up for a club yet. Remember, even if the player feels fit individually, there is a next level which is match fitness which can take months to attain.

A clear example is Mohammed Salisu when he first joined Southampton and had to wait for about eight months to make his debut. This was a defender coming from LaLiga, another top European league, but Ralph Hasenhüttl didn’t think he was fit enough so he worked on him for months.

This in no way is suggesting that Gyan can’t make it to Qatar. He can, just that there might have to be a compromise.

A last dance off the pitch?

Gyan’s precedence for his return was based on Roger Milla playing for Cameroon in the 1994 World Cup when he was 41 years. The difference is the Cameroonian was still playing actively and Gyan isn’t.

Christian Atsu came out to back his colleague requesting that Ghana ‘honour Gyan with his last wish’. Well, that can be done but maybe just not on the pitch. In the 2014 World Cup, former players such as Stephen Appiah were included in the technical team.

A similar move remains a possibility and perhaps the most likely if Gyan is interested. The forward recently offered advice to Felix Afena-Gyan on Twitter and could assume the role of a striker’s coach in Qatar.

He is doing some good things upfront. His hold up play is not bad. All the team need to do is to have confidence in him and supply the balls anytime he makes a run through channels. Striker gives up when he runs a lot and there there is no supply. Midfielders have to take risk.

The only concern is how that could affect the team’s harmony and unity. A few weeks before the 2019 Africa Cup of Nations in Egypt, Ghanaians witnessed the drama that came with Kwesi Appiah declaring Andre Ayew as the Black Stars captain. As a result, Gyan announced his retirement from international football just a month to the continental showpiece. Though, a day later he reversed his decision following a discussion with the president of Ghana, Nana Addo Dankwa Akufo-Addo.

The friction between the two players was evident in camp as the Black Stars bowed out of the competition in the round of 16 to Tunisia on penalties – the country’s worst performance at the tournament between 2006 and 2019.

Ayew has remained captain and is expected to lead the team in Qatar, it remains to be seen what the repercussions will be if Gyan is included in the team that travels to Qatar. Is it a risk the technical team will be willing to take?

An untouchable legacy but there is life after Gyan

Truth is, in our lifetime it is unlikely we may witness someone as prolific as Gyan play for the Black Stars. 51 international goals is an incredible feat that puts him in good company alongside some of the world’s greatest strikers ever.

When it comes to the World Cup, everyone will remember Gyan for scoring Ghana’s first-ever goal at the tournament vs Czech Republic.

That smashing goal against the USA that sent Ghana to its first-ever quarterfinal at a World Cup is also already etched in the history books alongside the header against Portugal in 2014 that made him the outright African top scorer at the Mundial with six goals.

If Gyan doesn’t play at the 2022 World Cup in Qatar, absolutely no one will forget about these euphoric memories.

On the other hand, forcing himself there and ending his career on a sour note could rather blemish his legacy. Inasmuch as Gyan feels he will be rendering a service to the country by playing, passing the baton seems like the better option.

Ghana misses Gyan and will continue to miss him. But the truth is the country hasn’t really relied on him for a volume of goals in major tournaments. In the World Cup, other players such as Stephen Appiah, Sulley Muntari, Andre Ayew, and Kevin-Prince Boateng have all chipped in goals.

The reality is that Ghana has often operated as a unit in major tournaments and relied on a good defence in recent years.

If you’re looking at Afcon data; with the exception of 2010 when Gyan scored three goals, he scored just a single goal in 2008, 2012, 2013, 2015, 2017, and 2019. Throughout these tournaments except in 2019, Ghana reached the semi-finals. Once again the likes of Sulley Muntari, Mubarak Wakaso, Dede Ayew, and Christian Atsu scored multiple times in the AFCON to help Ghana win games.

Recently, there has been the addition of Inaki Williams. Potentially, Eddie Nketiah could also play for the Black Stars. Felix Afena-Gyan is also being groomed and eased into the setup.

Asamoah Gyan’s legacy is untouchable but the sooner Ghana embraces the fact that there is life after him, the better.

DISCLAIMER: The Views, Comments, Opinions, Contributions and Statements made by Readers and Contributors on this platform do not necessarily represent the views or policy of Multimedia Group Limited.
Tags:
Asamoah Gyan
Owuraku Ampofo
World Cup