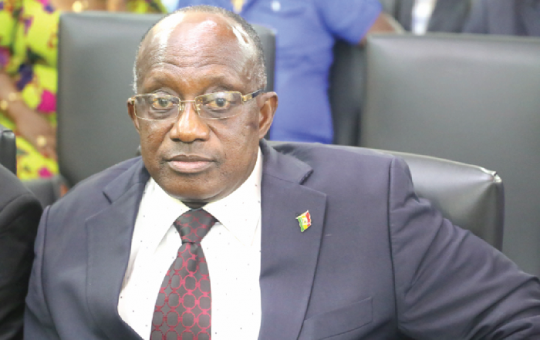 The Ashanti Regional Security Council has ordered a halt to all development in the Owabi Dam catchment area and has asked developers to submit their documents for scrutiny.

The measure is part of efforts to avert imminent shortage of water in Kumasi and surrounding communities as a result of encroachment and sand-winning.

Regional Minister, Simon Osei Mensah, who chairs the council describes as a security threat, activities of estate developers and sand winners at the head works.

He told the Regional Coordinating Council at the first meeting since assuming office that highway robbery, abuse of illicit drugs by the youth and illegal mining are among the security concerns he would devote serious attention to.

Luv FM’s Erastus Asare Donkor has been following the Council’s visit to the Owabi Dam and reports the activities of sand winners and estate developers have been disastrous.

According to him, as a result of these activities the depth of the dam has been reduced from 25 feet to six feet.

“If we don’t take radical measures to stop this, a time will come greater part of Ashanti Region will not have potable water to drink,” Mr Osei Mensah said.

The Owabi Dam together with the Barekese Dam provide water to Kumasi and other parts of the Ashanti Region.

On steps taken by the Council to attempt to solve the pollution of the dam, the Regional Minister said the DCE has been instructed to issue letters to all those estate developers who have acquired lands closer to the dam to be wary of its activities.

The Minister also pledged to fight high way robberies at Manso kwanta, a District in the Ashanti Region.

“I don’t know if it is because of the high level of galamsey activities in Manso Nkwanta, armed robbery is on the increase in that district,” he said.