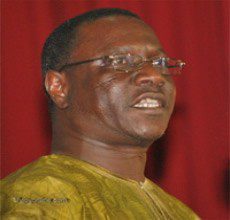 A member of the Public Accounts Committee of Parliament and MP for Talensi says the chairman of the Committee Kan Dapaah has no power to nominate Isaac Asiamah as new chair, even if he is interim.

John Tia is accusing Dapaah of taking arbitrary decisions alien to a committee he has been a member of for the past 20 years.

The committee chair nominated MP for Atwima-Mponua, Isaac Asiamah to be the new interim chair in the next judgement debt hearing involving business man Alfred Woyome after he was cited for possible bias.

Lawyer for Woyome claimed the two leaders of the committee – Kan Dapaah and Agyemang Manu were part of the cabinet that truncated the bid process which legitimately awarded Woyome’s company the right to build the stadia for the CAN 2008 tournament and which has been the root cause of the judgement debt.

He doubted his client will receive a fair hearing if the two were allowed to sit on the committee.

Kan Dapaah, together with his deputy obliged and recused themselves from the next hearing of the controversial matter. But just before he recused himself, he named Isaac Asiamah as heir, at least for the hearing of Woyome’s case.

By Parliament’s rules and procedures it is only members of the Minority that are made to chair the Public Accounts Committee.

But John Tia insists the authority to appoint a chairman for the committee does not rest with Kan Dapaah.

“Asiamah cannot be the interim chairman of the Committee,” he stated, adding, the best Kan Dapaah can do is to submit a report before the House so Parliament as a whole can take a decision.

“You cannot arrogate that power to yourself,” Tia snapped, adding, in all his 20 years as a member of the committee he has never seen the committee being administered like this before.