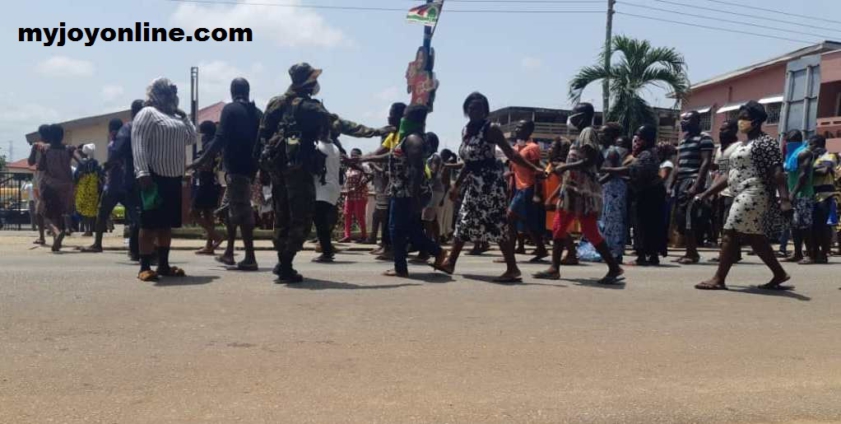 Residents in queue being directed by military

The Municipal Chief Executive (MCE) for Asokwa has apologised for the incident that led to a total disregard for social distancing and subsequent confusion during the distribution of food and other relief items in his municipality on Monday.

“I know something went wrong at Asokwa. Since I am the head, I have to take the blame,” Akwanuasah Gyimah said.

Social media users went ballistic on Monday when a concerned citizen started a live stream showing hundreds of residents on the streets of Asokwa in breach of the lockdown and social distancing protocols.

Many raised issues with the way government officials in charge of the distribution of food were handling the exercise.

But Mr. Gyimah explained that arrangements were made for the orderly execution of the exercise for three communities in the municipality.

He told JoyNews, residents from other administrative jurisdictions gate-crushed to disrupt the activity.

“The food from RCC was first brought to Asokwa MacKeon Temple then we distributed them to the other six centres. People had fore knowledge that we were going to share foodstuffs at MacKeon.

Since it was only Asokwa that shared food items yesterday, other people from KMA, Oforikrom; people from Asafo, people from Amakom, people from Anloga and Bomso all trooped here for food, although they were not supposed to come here”.

According to him, although he tried to get the crowd under control, his effort yielded little or no results.

“I did my best but just that my best was not enough. People did not listen” He said.

According to him, it took reinforcement from the police and military to disperse the crowd.

“The crowd did not stay there for too long.  There were military men and police officers there already just that the numbers were not enough. So I quickly called in reinforcement and they came to disperse the crowd”.

“That center was meant for Ahinsan, Kaase and Asokwa but because the adjourning suburbs  heard that we were sharing food, they all trooped in there.

“You know the attitude of Ghanaians; one will place a call to the other and within a twinkle of an eye, we saw such a huge crowd”.

Mr. Akwanuasah Gyimah said new and well thought out measures have been put in place to prevent a recurrence.

He accepted full responsibility for the incident while admitting that lessons have been learnt.

DISCLAIMER: The Views, Comments, Opinions, Contributions and Statements made by Readers and Contributors on this platform do not necessarily represent the views or policy of Multimedia Group Limited.
Tags:
Akwanuasah Gyimah
Asokwa Municipal Assembly
Coronavirus