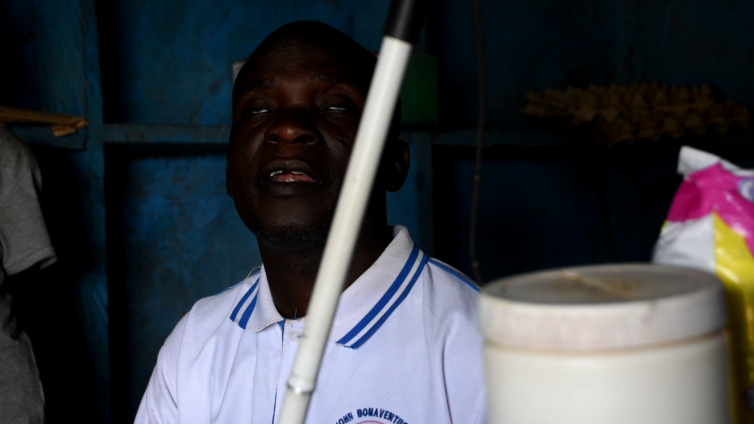 Mathew, who is visually impaired sits under a tree outside the compound of his family house, in his home community, Abunyanya, in the Nkwanta North District of the Oti Region.

He sits with his head up, blinking his eye intermittently.

One could imagine what was going through his head after suffering the devastating effect of the coronavirus pandemic. It messed up his finances.

He, thereafter, had to struggle to fend for his family members who rely on him and his senior brother for their livelihood.

Mathew was born without any disability.

Growing up, he was an education enthusiast who enrolled in the community basic school.

He, however, had to drop out in the late 1980s when the unfortunate happened.

“I was happily attending school when one day my colleagues kicked a football towards me. I noticed the ball travelled with sand which entered my eye. I tried to clean the sand, but after several attempts, I noticed I had become blind because I couldn’t see anything.

My furniture also got missing at school and that was the end. I was with the batch which started the 3 years Junior Secondary School system”, he narrated.

His dream of growing into an educated elite was shuttered, compelling him to take to farming to raise money for his upkeep.

With the support of his elder brother, he braved the odds to fend for himself, his siblings and his blind mother.

He managed to raise some money to set up a corn mill business that only survived for a year.

Until 2018 when he benefited from the distribution of the District Assembly Common Fund which he used to set up a shop, Mathew survived on proceeds from his farm and corn mill business.

He explained that “I also have a corn mill which I established with my savings. But it is spoilt, the engine block is damaged.”

He then concentrated on his shop at the community centre, which he was operating alongside the corn mill.

Mathew trades in a range of merchandise which he travels a deplorable road to buy in the Kpassa market.

He lamented that, “the coronavirus pandemic destroyed a lot of things. Wholesalers from Ho, Hohoe and Kadjebi no longer brought goods. When we travel to buy goods in Accra, we are unable to sell them because they are expensive.”

Unfortunately, the effects of the pandemic coupled with financing the funeral of his shop attendant plunged Mathew’s business into distress.

He lost a chunk of his capital, after financing the funeral of the attendant.

“The boy I was sending lost his life in a vehicular accident when he was travelling to Kpassa to buy goods. I was compelled to use some of my capital to buy a coffin and bury him.

I started trading again with the little money left when the coronavirus pandemic ended”, he said.

However, Mathew appealed for financial support from all and sundry to help put him back into business to increase his profit margin.

This he believes would contribute to improving the livelihoods and living conditions of his family members.

DISCLAIMER: The Views, Comments, Opinions, Contributions and Statements made by Readers and Contributors on this platform do not necessarily represent the views or policy of Multimedia Group Limited.
Tags:
Abunyanya
Coronavirus
Visually impared trader