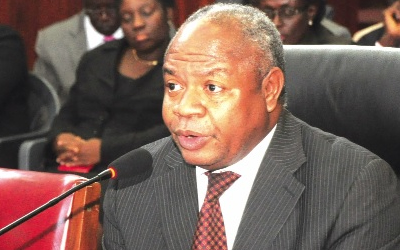 Working documents detailing an audit conducted into the operations of the Ghana National Petroleum Corporation (GNPC) by the State Enterprises Audit Corporation (SEAC) with respect to a sold drill ship of the corporation could not be produced for the Judgement Debt Commission as expected because the documents had been shredded.

The drill ship, which belonged to the GNPC, was used for the exploration of oil in the Tano Basin but was sold in 2001.

The Senior Manager of the SEAC, Mr Boniface Senahia, who was subpoenaed in respect of the documents, told the commission at its hearing in Accra on Monday that the working documents were shredded in 2005.

However, he said he could tender the financial statements and management letters on the ship before the commission, much to the disappointment of the commission.

Mr Senahia explained that the GNPC was SEAC’s client until 2005, when the audit corporation ceased to render services to the corporation, for which reason it found no use for the working documents and had them disposed of.

Asked what the mandate of SEAC was and the law establishing it, Mr Senahia said the organisation was established in 1965, with the mandate to audit state-owned enterprises (SoEs) under the authority of the Auditor-General.

He added that Act 232, 1965 established the outfit which, in the past, also rendered auditing and assurance services to SoEs, including the Electricity Company of Ghana, the Ghana Water Company Limited and the Minerals Commission.

When asked by Mr Kofi Dometi Sokpor, counsel for the commission, about the profit on the disposal of the drill ship, Mr Senahia could not give a specific amount to the commission because of the absence of the working documents.

“What you are trying to give us this morning will not send us anywhere,” Mr Sokpor added.

When asked why the responsibility to audit the GNPC was taken away from the SEAC, Mr Senahia said “that was the decision of the Auditor-General”.

The senior manager could not tell the commission how specific equipment, amounting to GH¢2.3 million, was disposed of, nor could he give a breakdown of fixed assets of the drill ship that stood at GH¢1.6 million.

It was clear to the commission that Mr Senahia could not provide the information for which he had been subpoenaed and he was, therefore, asked to reappear on October 21, 2013.

Next to appear was a Chief State Attorney, Mrs Dorothy Afriyie Ansah, who presented a box full of documents on an agreement between the Government of Ghana and Balkan Energy.

She presented to the commission documents on the agreement and copies of arbitration proceedings between the government and Balkan Energy which had to do with the decision of Balkan to drag the government to an international arbitration in the UK demanding payment for services it had rendered.

But the Attorney-General’s Department contested that decision on the grounds that Balkan failed to commission the Osagyefo Barge as agreed and so the government did not owe the company.

The Chief Director at the Ministry of Energy, Prof. Thomas Mba Akabza, explained to the commission that the role of the ministry in the whole affair was to facilitate the trip of the team from the Attorney-General’s Department to the UK for the arbitration.