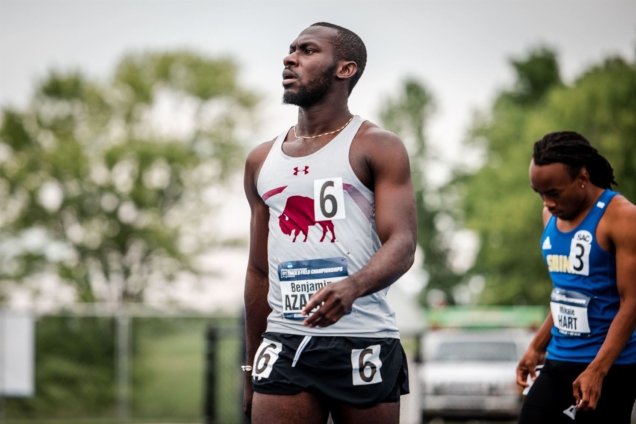 Azamati and ASICS Global commit to a partnership of two and a half years and as per the agreement.

As Azamati’s first major sponsorship and endorsement deal, it suggests the West Texas A&M star man is opting for professional athletics over competing in NCAA (college) athletics. As it stands, Azamati has one year of college left and three years of NCAA eligibility, but due to the deal with ASICS Global, the NCAA rules allow him to waive the remaining three years.

Azamati has consistently made headlines since bursting onto the Ghana Athletics scene at the University of Ghana. At the 2019 Ghana University Sports Association games, the former Presbyterian Boys Secondary School and University of Ghana student beat the 100m champion Sarfo Ansah to announce himself and held on to the title until leaving for the United States in 2020.

Following the GUSA games, Azamati, Joseph Paul Amoah, Sean Antwi, and Martin Owusu Antwi won 4x100m gold for Ghana at the Africa Games in Rabat- The quartet would later qualify for the 2019 World Athletics Championships, the 2020 World Relay Championships, and the 2020 Olympic Games in Tokyo.

A similar story unfolded at West Texas A&M. In the space of two years, Azamati broke all key records in the 100m and 200m, becoming an All-American; he also set a record on the 4x100m relay team.
The Olympian and All-American signed the deal with ASICS Global executives yesterday and he is thrilled to be a part of the new family.

“I am thrilled to partner with a sportswear giant like ASICS as I prepare for the World Athletics Championships in 2022. Having a partner who believes in who I am and understands what my needs are, enables me to develop and evolve as a professional athlete.”

“Additionally, ASICS was a natural fit for me, as I will now have access to the most advanced technology in footwear and apparel. This partnership will help me reach new heights as a competitor.”

Azamati has been able to gain considerable experience from participating in and performing at the Wanda Diamond League in Oslo and Paris, thus far. To mark the highlight of his exposure to international competition, Azamati will compete at the 2022 World Athletics Championships, as well as the 2022 Commonwealth Games.