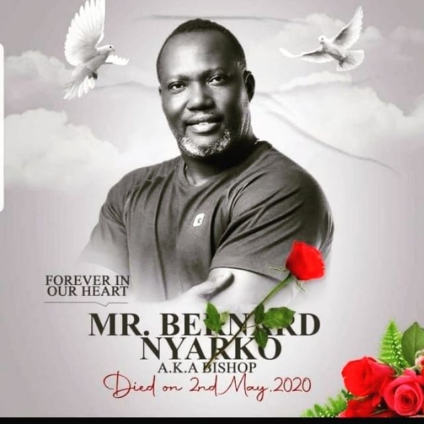 The family of late actor and pastor, Bernard Nyarko, has visited his grave at Obosomase in the Eastern Region as they mark the first year of his death.

In photos that have since been trending on social media, the family was seen standing around the grave which had a bust of the late man of God.

Clad in black and white cloth, they sang some Presbyterian hymns and prayed.

His mother, who was present at the grave could not hold herself together, broke down in tears amid wails of pain.

He was buried on June 27, 2020, in a private burial at Obosomase in the Eastern Region.

Mr Nyarko was a household name and was noted for his role as a pastor in many movies as he brings many characters to life on the screens.

In her post on Instagram, the Kumawood star stated the pain of losing Bishop Nyarko is still as strong as the day he passed.

Mercy Asiedu wrote that the actor was the best friend, colleague and brother anyone could have ever had.

“It’s another year since we lost you Bishop and the pain is still so strong. I treasure our memories like nothing else and remember them even more on an anniversary like this,” she wrote.