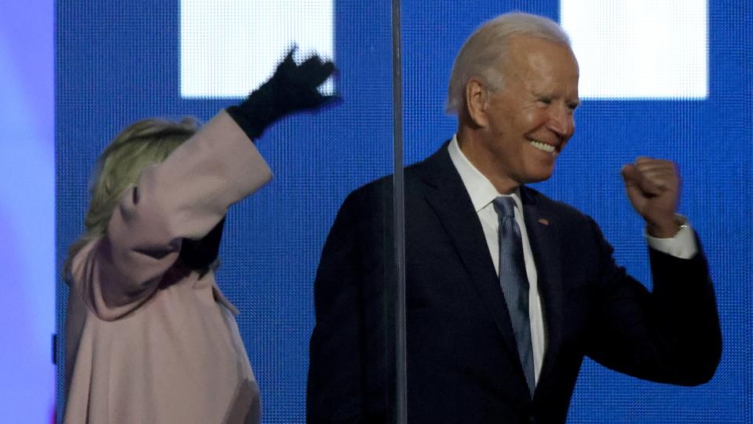 Democratic candidate Joe Biden is facing increasingly encouraging electoral vote prospects as absentee ballots continue to be counted in key states, with his campaign projecting confidence on Wednesday that results will come in both favourably and swiftly – but the Trump campaign pushed back on the notion mail-in ballots will favour Biden.

A Biden campaign official told Forbes that they “feel confident” they’ve won Wisconsin and its electoral votes, where Biden currently leads by 0.7 points with 97% of estimated votes reported, according to the New York Times.

Biden also took the lead in Michigan Wednesday morning – ahead by 0.2 points with 90% of estimated votes in, according to the Times – with his campaign telling Politico they expect the state to be called for Biden by mid-afternoon.

The campaign official also told Forbes it is “confident” about Pennsylvania, where Trump still leads by more than 10 points but where around 1.3 million mail-in ballots are still outstanding, with highly favorable results for Biden already tricking in.

In each of these states, Biden’s lead is strongly favored to grow as mail-in ballots, which skew heavily Democratic, are counted by the thousands.

Even without Pennsylvania, Biden would be able to pull off a win by maintaining his lead in Nevada – where only mail-in votes from a Democratic-leaning county are outstanding – and he currently leads in states with a collective 270 electoral votes.

The Trump campaign pushed back on the notion that they are underdogs as more ballots come in, telling reporters in a briefing “If we count the legal ballots, the president wins,” predicting a 40,000-vote win in Pennsylvania and calling Biden’s margin in Wisconsin “recount territory.”

If the race hinges on the Trump campaign requesting a recount in Wisconsin, it’s unlikely to reap their desired results. Biden currently leads in the state by more than 20,000 vote, where as the 2016 Wisconsin recount netted Trump just 131 votes.

Trump incorrectly claimed victory on Wednesday morning based on his now-dwindled leads in uncalled races. In a sign of his lack of faith in his chances when all mail-in votes are counted, Trump announced he would attempt to bring a lawsuit before the Supreme Court in an effort to block further mail-in votes from being counted.

“If the president makes good on his threat to go to court to try to prevent the proper tabulation of votes, we have legal teams standing by ready to deploy to resist that effort. And they will prevail,” Biden campaign manager Jen O’Malley Dillon said Wednesday morning.

Biden won in Arizona, where a Democrat hasn’t won since Bill Clinton in 1996, and Nebraska’s 2nd district, where Democrats haven’t won since Barack Obama in 2008, giving him an already larger number of electoral votes than Hillary Clinton in 2016.

The Times’ Nate Cohn estimates that, if current trends with mail-in votes continue, Biden will finish with a 2-point victory in Pennsylvania.