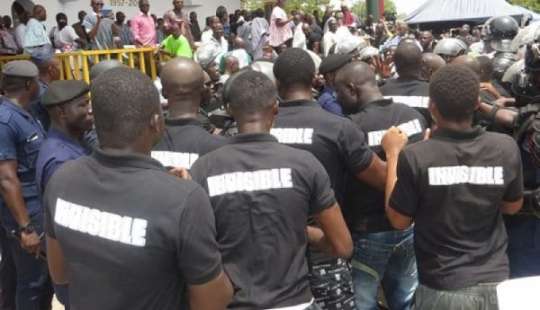 Members of a Vigilante Group

A BBC African Eye Reporter, Peter Macjob has stated that civilians in Nigeria have turned into vigilantes due to the activities of cult groups.

Speaking on the Super Morning Show, he noted that this is due to the failure of police officers in the country to bring the activities of cult groups under control.

His comment was part of discussions on the Super Morning Show which centered on the activities of cult groups especially that of Black Axe, a cult group that mainly operates in Nigeria but has affiliations in some parts of West Africa. The conversation also follows an investigative piece produced by the journalist and two others.

“It’s gotten to the point where the police have been overrun but what makes it more complicated is that in the course of the investigation accusations that members of the Judiciary, Clergy, the Police, military, are all members of this group,” he said.

In Ghana, activities of vigilantes are highly not tolerated. This is because of the atrocities they commit in society.

Previously, security forces in the country struggled to tame them, especially because of their political affiliations but with the introduction of the Vigilantism Law, their activities have significantly been brought under control.

The country has seen groups like the Invincible Forces and the Delta Force (which have been linked to the NPP), the Hawks, the Azorka Boys, the Lions, and the Dragons (linked to the NDC), but in compliance with the vigilante law which came into force on the back of the Ayawaso West Wuogon by-election violence and outlawed vigilante groups, political parties disbanded all vigilantes associated with them.

In Nigeria, however, civilians have adopted the use of vigilante groups as a protective mechanism against the activities of cult groups.

According to the BBC African Eye reporter, who disclosed this, clamping down on the activities of these cults has become difficult especially in Nigeria because high profile personalities such as Judges, police officers, etc. are all affiliated with the cult.

Hence, civilians who feel threatened by such groups in Nigeria come together to form vigilante groups to combat them.

“And because there are no police, ordinary civilians form themselves into vigilante groups,” he said.

They do that mainly “because they have either been victims of cult attacks or because they feel that they can’t sit back and let these rapscallions take over their communities,” he said.

He added that fighting occultists who are apprehended, in court is a bit difficult since there is no evidence to serve as grounds for prosecution.

Occultism has become a headache in Nigeria, following atrocities committed by members of various occult groups. Notable among the groups is the Black Axe.

The cults were initially created to break chains of oppression in society, to relieve the citizenry of hardships as well as seek better livelihoods for citizens in Nigeria. These, however, cannot be said of cult groups in the country since there has been a diversion from their initial motive. With time, the groups have turned into atrocious groups, committing various crimes including killing, armed robbery, kidnapping, etc. The BBC African Eye report has more.