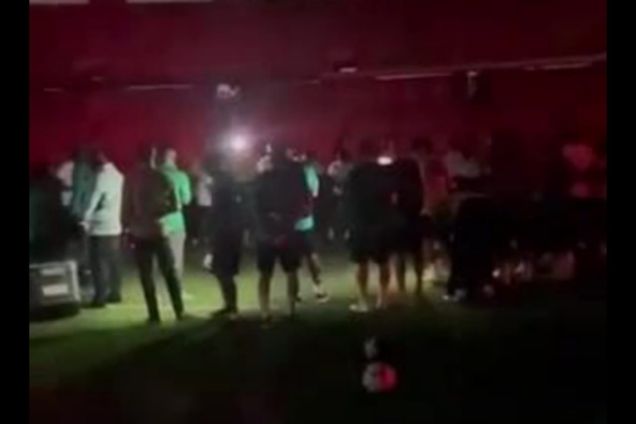 Joy Sports journalist, George Addo Jnr., has confirmed that a training session by the Black Stars of Ghana on Monday evening in Nigeria, was interrupted by five brief power cuts.

According to him, the intermittent disruptions in power supply brought the training session of the senior national team to a halt.

Speaking in an interview on Joy FM’s News Night, George Addo Jnr indicated that the situation was quickly resolved, as the pitch was lighted in no time to enable the team prepare for the second leg of their World Cup play-off against the Super Eagles of Nigeria in Abuja.

“We had power cuts intermittently. It wasn’t over long periods. Maybe, just a minute, some two minutes, three minutes, but the lights went off and on for about four or five times, just reminding us of the soil we are on, as we prepare for this game”, George Addo revealed.

“All you have heard is true. The lights went out. I was in the press room waiting for Coach Otto Addo to come in to speak, and the lights went on and off. At the same time whilst that was going on, the pitch whilst the Black Stars were training as well as the lights were flashing, disco lights a bit”, he added.

Narrating the occurrence, he stated that Ghanaian journalists who were at the scene laughed off the power cuts; while their Nigerian counterparts wondered about the brevity of the power cuts.

This is because, according to them, power cuts in Nigeria usually take longer to be restored.

But reacting to the development, a Nigerian journalist, Eyitope Kuteyi, who spoke on NewsNight, dismissed claims that the power outage was a sabotage of the Black Stars training session.

According to him, the menace of power outage has been persistent in recent times, and therefore it was not targeted at the visiting team.

The players didn’t have to come down through the aircraft the way Super Eagles came down from the aircraft. So I don’t think that’s a retaliation. It’s something that we’re used to in Nigeria, but I can assure you that tomorrow it won’t be like that. So it’s not a form if retaliation. Trust me on that”, he explained.

On Tuesday, the Super Eagles of Nigeria, will host the Black Stars of Ghana, in the second leg of the World Cup play-offs in Abuja.

During the first leg on March 25, the Stars held the Nigerians to a goalless draw in front of a teeming home crowd at the Baba Yara Sports Stadium in Kumasi. Despite a few decent chances, the Stars failed to find the back of the net in front of their ecstatic home fans.

But speaking to the press ahead of the return leg, Black Stars Coach, Otto Addo has assured that his side is poised and ready to grab the needed three points at the end of ninety minutes on Tuesday in Abuja.