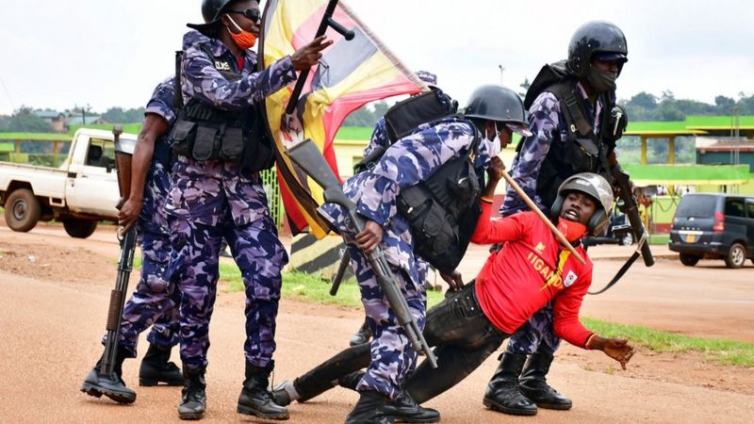 Sixteen people have been killed in two days of protests in Uganda triggered by the arrest of musician-turned-presidential candidate Bobi Wine.

The deaths occurred during security operations, police said in a statement, adding that a further 65 people had been injured and about 350 arrested.

The cause of the deaths or the nature of the injuries was not disclosed.

The 38-year-old has been accused of flouting coronavirus prevention guidelines against drawing large crowds following a campaign rally in the east of the country.

The musician is among 11 candidates challenging President Yoweri Museveni, who has been in power since 1986.

The election will be held on 14 January next year.

On a second day of protests across the country, security forces fired tear gas and live bullets to disperse people in Uganda’s capital, Kampala.

Demonstrators have been burning tyres and rubbish in the streets and blockading roads in the city. Businesses have closed and there is a heavy police presence.

Shock and anger at police response

This is the worst violence to erupt on the streets of Uganda since Bobi Wine was nominated as a presidential candidate.

On Thursday morning, the BBC saw members of the security forces entering shopping malls in Kampala’s city centre to chase people out, or firing tear gas inside to flush them out. Traders and their customers were pouring out in their hundreds with their hands in the air.

Much of the violence is being documented by ordinary Ugandans and posted on social media. Ugandans online have expressed anger and shock at the amount of force used by the police – and at the lives lost.

The opposition say the enforcement of the coronavirus prevention restrictions is being applied selectively.

Incumbent President Yoweri Museveni has continued to campaign uninterrupted – while he has not addressed crowds, his supporters have been gathering to welcome him in cities and towns.

A government spokesman, Ofwono Opondo, said that police had responded appropriately. He blamed the protesters for not seeking more “peaceful methods” to raise and “resolve” their concerns using legal means.

Bobi Wine’s supporters are calling for him to be released from police detention. He has not yet been charged.

Earlier this month, dozens of his supporters were arrested as they escorted him through the streets of Kampala when he was cleared by the electoral commission to run in next year’s presidential election.

Since he expressed his presidential ambitions, police and the military have repeatedly dispersed his rallies, and beaten and detained his supporters.

He has denied the allegations.

DISCLAIMER: The Views, Comments, Opinions, Contributions and Statements made by Readers and Contributors on this platform do not necessarily represent the views or policy of Multimedia Group Limited.
Tags:
Bobi Wine
Uganda protests