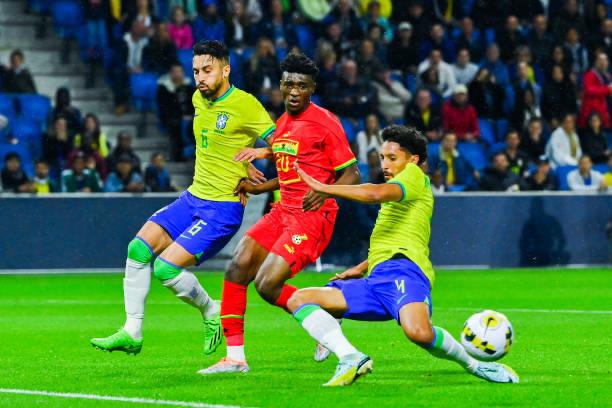 As expected, Ghana has a lot of work to do.

Brazil eased to a comfortable 3-0 win against the Black Stars in Le Havre on Friday night that left the five-time world champions still unbeaten in 2022.

The pre-World Cup friendly was the first test for Ghana, the lowest ranked of the 32 teams going to the global showpiece, to gauge their level as they prepare to face Portugal, South Korea and Uruguay when the tournament kicks off in 57 days.

A first-half blitz from the Seleção dazed the Africans – playing without Thomas Partey who pulled out just before the game for precautionary reasons – with goals from Marquinhos and Richarlison (twice) settling the match before the break. A series of changes in the second half rallied the Black Stars to play better, by which time it was mission accomplished for the South Americans.

Ghana coach Otto Addo cut a chastened figure in the post-match presser, where he admitted that his side needed to be better, and quickly, if they had any hopes of making an impact in Qatar.

Here are 10 things we learned from the tie:

He opened the press session with “I will start with myself because I made mistakes today.” That was noble. “I learnt a lot more about my players, and picking the next 11 will depend on the performance in the next game.”

That was an understatement, because Otto does not need a performance in the next game to know that starting André Ayew, a player who is not as fast as he used to be, in central midfield is no-no. It should never happen at any time, much less against the top-ranked side in the world. Neither should an off-form Felix Afena-Gyan be starting games. It was obvious that the lineup was an invitation to a Brazilian treat.

2. BOLD CALLS MUST BE MADE

There is no time for avoidable trial-and-error as seen on Friday. It is a well-known fact that the team that qualified Ghana to the World Cup was not good enough, which precipitated that quest to strengthen. If that has been successfully done over the last few months, why persist with that weaker team?

If there is a fear of stepping on egos of big names, that has to be crushed immediately. The management of the Black Stars did not spend so much time chasing Southampton’s Mohammed Salisu, Brighton’s Tariq Lamptey, and Athletico Bilbao’s Iñaki Williams to see them not used as they ought. If they merit starting positions, so be it. There should be zero tolerance for sentiment.

3. TEAM GOOD ENOUGH TO PLAY MULTIPLE WAYS
There may be the temptation to think Ghana must go three-at-the-back following a marginally improved second half when the team ditched the 4-2-3-1. However, context matters. The skillset available suggests different opposition will demand different approaches.

A Daniel Amartey – Alex Djiku – Salisu back three offers better stability against a side with sharp wingers, as was the case here when Otoo went 5-3-2. The good news is that the current Black Stars side is deep enough to switch to a flat back four if need be.

There are also players suited to a high press should the need arise. All in all, it’s a good headache to have if merit is placed above emotions.

4. THE THOMAS PARTEY QUESTION
A world class player, the Arsenal man cannot catch a break with injuries and it has reflected his output for Ghana in the last year. Partey has played just 29% of games under this coach (180 out of 630 minutes), robbing the team of his evident quality. Baba Iddrisu, who was drafted in his place against Brazil, is not as good in ball progression or line-breaking passes. Ghana need a similar stylistic backup, and there’s one in Abdul Salis Samed of Lens.

The good news, for the moment, is that Partey is fine.

Large parts of the second half saw a fascinating duel between Neymar and Ghana’s rising star, Kudus Mohammed, as they snapped at each other’s heels repeatedly. The Brazilian star got cautioned after one such naughty challenge, but it is Kudus’ reaction to Neymar’s well-known antics that is concerning.

The Ghanaian was lured into battling his more accomplished opponent (Neymar bagged two assists and orchestrated the left side of Brazil’s attack for much of the tie) when he could have spent time enhancing the Black Stars’ performance. A word about avoiding such distractions from the technical team will do.

6. …BUT HE NEEDS TO PLAY HIGHER

On current form, Kudus has no business operating from deep. He has to play higher up the pitch to influence games more via creating or through goals. He should be playing as a 10, or as a false nine in a free role. If it means benching the older Ayew, it’s a switch worth taking.

Starting Afena-Gyan has to be one of Otto’s key mistakes, and it did not work because the forward got little support or supplies, making him ineffective. When he tried to drop deeper, his lack of experience made it easy for Marquinhos, Alex Telles and Thiago Silva to pick him apart.

Williams’ introduction in the second half provided a glimpse of what experience can do, as he played on the shoulders of the Brazilian defence, isolated himself enough to be found by the midfield, and made several direct runs into the opposition box. He has as few touches of the ball (14) as Afena-Gyan (13), but his output was better.

Afena-Gyan is only a teenager, and throwing him down the deep end in this manner can be career-busting in an unforgiving national team like Ghana.

Jojo Wollacott has been a victim of his status as a second-tier England-based keeper in the eyes of many Ghanaian fans, despite playing in a generally weak Black Stars team that’s prone to basic defensive errors. He conceded three goals against Brazil, but were they his fault? The first was a simple corner defended poorly; the second was a gorgeous first-touch strike; the last was a flicked-on header off a free kick.

In all, he’s played 12 games, conceding 12. He is strong is 1v1 situations, but seems to have issues commanding his defence. The main option for Ghana is South Africa-based Richard Ofori, whose place as number one Wollacott has taken since October 2021. Then there is Manaf Nurudeen, who has a bit of a reputation as a penalty stopper.

For the moment, the technical team trust Jojo, and that is not set to change soon.

Brazil have kept 12 clean sheets in their last 17 games, and a key reason is because of their choking press. They give the opposition little time to think. Ghana fell into this trap, and the 4-1-4-1 in the first half was in name only. There was neither a first line of press when Thiago Silva initiated moves, nor when it progressed into the midfield areas.

Also of note was that attacking transitions were virtually non-existent. The Ghanaian players did the running, rather than allowing the ball to do so. The lack of pressing manifested especially in the first half, with Baba Iddrisu as the only defensive-minded player in the midfield three. Brazilians carved the Black Stars at will; Vincius Jr and Raphinha benefited from the lack of pressing to work in space and created several chances.

It is time to inject confidence in the next game. Brazil was a chastening experience, and the team is in need of a morale-booster. Nicaragua lost 2-1 against Suriname on Thursday, and a better-organized Black Stars should deliver a good performance.

It is no time for ego-striking. It is time for bold calls. Fans are expectant, as they should be, because this Ghana team is not as bad as was made to look against the South Americans.

DISCLAIMER: The Views, Comments, Opinions, Contributions and Statements made by Readers and Contributors on this platform do not necessarily represent the views or policy of Multimedia Group Limited.
Tags:
Black Stars
Brazil
Nicaragua