Brexit: Barnier says UK should have control of its waters 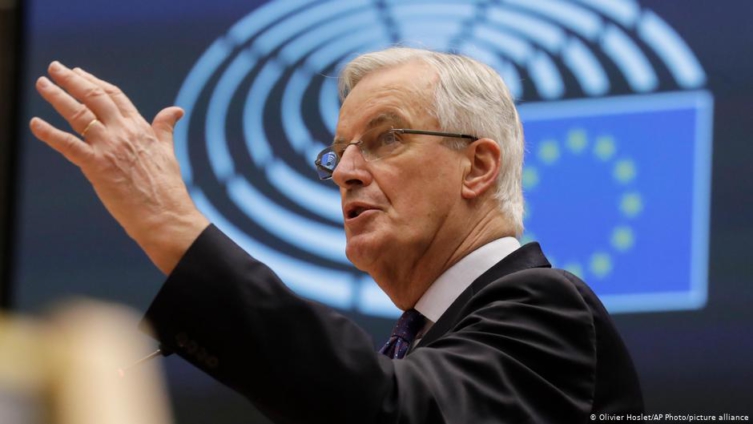 Billions’ worth of trade between the UK and the EU hangs in the balance as the two sides clash over a minor but symbolic matter of fisheries.

Cross-Channel trade chaos beyond January 1 remained a threat as EU and UK negotiators trod water on Sunday, ostensibly over fisheries — a tiny but touchy fraction of trade between the continent and the British Isles.

The EU’s top negotiator Michel Barnier seemed to signal willingness to compromise in a Sunday tweet, professing respect for “the sovereignty of the UK.”

Both sides “must have the right to set their own laws & control their own waters,” he wrote, while also saying the talks were at a “crucial moment.”

In this crucial moment for the
🇪🇺🇬🇧 negotiations, we continue to work hard with @DavidGHFrost and his team.

The EU remains committed to a fair, reciprocal & balanced agreement. We respect the sovereignty of the UK. And we expect the same. (1/2)

A late Sunday deadline to see any accord text had been set by the European Parliament, with German deputy David McAllister insisting that only then could ratification emerge at an emergency session on December 29.

“This requires that on Sunday evening at the latest we get a text, in order to start our prepared measures and world,” McAllister told Germany’s NDR broadcaster.

Without a central deal, cross-Channel “single market” trade would disintegrate, with basic World Trade Organization rules applying instead. The shift would result in higher prices and more border checks.

Why are fisheries so important?

The main obstacle — fishing rights for EU boats in UK waters — is relatively minor compared to massive trade losses and hundreds of thousands of jobs which would be at risk if the talks fail.

Fisheries bring in some 0.12% of UK’s annual GDP and most of its catch is exported. However, the issue is emotionally charged for both UK and northern EU states.

During the 2016 Brexit campaign, proponents of Brexit used the EU fishing rights as an example of the bloc undermining the UK’s sovereignty.

From Brussels, the AP news agency quoted “an EU coastal nation” official as saying the bloc was refusing to yield more than a quarter of fishing quotas it stands to lose, should Britain take full control of its waters.

Already on Friday, the EU’s Michel Barnier had said “just a few hours” remained to clinch a trade deal to follow the single market and customs union transition that has applied since Britain halted its EU membership in January.

In recent days, UK ports have become congested and more trucks have converged on the Eurotunnel in both directions as traders rush to stockpile goods for whatever comes.

DISCLAIMER: The Views, Comments, Opinions, Contributions and Statements made by Readers and Contributors on this platform do not necessarily represent the views or policy of Multimedia Group Limited.
Tags:
Brexit
Michel Barnier