British Airways strike sees fares rise by up to 2,200% 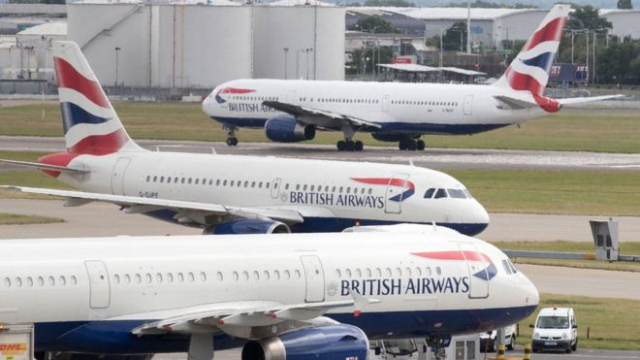 This week’s British Airways strike has caused chaos for an estimated 280,000 passengers who were due to fly with the airline.

But it has also rocketed up fares to destinations around the world by up to 2,200%, leaving the UK isolated amid sold-out routes and stratospherically priced flights.

While air ticket prices are typically fluid and rises during periods of heavy demand are not uncommon, one expert said the level of increase seen during this strike was particularly extreme.

That was the price offered on Monday morning for an easyJet flight departing London Gatwick Monday evening, and returning Wednesday morning. Returning Tuesday cost a little less, at £1,055.

Those fares — which did not include seat assignments, checked baggage, or any food or drink — had sold out by 3 p.m. Monday.

Nice — the gateway to the South of France and the Italian Riviera — seemed particularly affected by the two-day strike. All eight daily easyJet flights from Nice to London were sold out on Monday and Tuesday, the British Airways strike days. The cheapest return flight on Wednesday September 11 was £448.50 ($555) one-way.

Meanwhile, British Airways was charging £694 ($858) for a Nice-London Heathrow flight on Wednesday evening, as it struggles to get back on schedule.

British Airways is selling return fares to Nice on other dates in September for £58 — making this week’s flights nearly 22 times as expensive.

The price hikes look set to worst hit business travelers on short-turnaround trips. All flights from London to Denver on Monday were sold out; but flying out Tuesday morning and returning that evening would cost a staggering £4,378 ($5,413) in economy — an inflation of 1347% over British Airways’ September lead-in fare of £325 ($402) return.

According to airfare specialists Flight Centre, the average cost of a return fare from London to Denver over the past 12 months has been £425 ($526).

Cairo — which British Airways is selling for £415 on other dates this month — costs £2,502 for an economy ticket, flying Monday and returning Tuesday. The flight time to the Egyptian capital is just under five hours, making the fare around £500 per hour — more than the £403 average fare for the flight in its entirety over the past year.

Ironically, the flight is sold as a British Airways flight, but operated by Air Belgium, so it is exempt from the strike action.

BA’s sole rival on the route, Egypt Air, has fares from Heathrow to Cairo for £1,092 this week.

Tokyo is among the price-hiked destinations

A two-night trip to Tokyo, departing Monday, cost £2,704 ($3,341), going out on Japan Airlines in premium economy (economy was sold out) and returning Wednesday in economy on British Airways. The average fare over the past 12 months is £568.

And then there’s Miami. According to Flight Centre, the average economy fare for flights from Heathrow to Miami over the past 12 months is £401, and last month, a British Airways sale was selling business class tickets to the city throughout September for £1,009 and first class for £1,500. Booking this week, however, a return fare in economy costs a minimum £1,980 ($2,446) to £2,613 ($3,228) — again, in economy, three classes below first.

European destinations through the roof

Meanwhile, flights to popular European business destinations have also skyrocketed. A return from Heathrow to Frankfurt over the strike days costs £837 ($1,004) in economy for a 95-minute flight, while Milan costs £883 ($1,090) on Alitalia from London City — or £1,487 ($1,837) if you fly out in business class on British Airways, whose City Airport flights are not affected by the strikes.

British Airways is currently selling business class fares from London to Milan on other dates in September from £184 ($227) return — making this week’s fares eight times more.

One of the few destinations not to see a price hike is Hong Kong, whose current political problems have led to fares taking a dive.

This week, passengers from London can get a premium economy seat for the 12-hour flight for £963 on premium carrier Cathay Pacific — less than that 105-minute flight in economy from London to Nice.

Gilbert Ott, the aviation blogger behind God Save The Points, who monitors last-minute travel from the UK, called this week’s prices “absolutely at the extreme end of the pricing spectrum, even for last-minute travel.”

“It’s not impossible to find business class returns to the USA lower than what easyJet is charging for a short flight, in economy,” he said.

“In some cases these are two or three times normal walk-up [last-minute] fares.

“Obviously supply and demand is a big factor here, and without BA, supply is in short order, but airlines are certainly taking advantage of the opportunity.”

But he denied the airlines were taking advantage of passengers.

“Having absorbed quite a lot of passengers from the BA strike, if an airline is going to bump someone, they’ll only do it for an extreme fare.

“But there are definitely examples where airlines however are taking advantage of a more captive market than usual, and anyone aiming to travel on these specific dates is in for an unpleasant pricing surprise.”

For anyone needing to travel, Ott suggests getting to another European city and flying on from there. Flights to Amsterdam — connected to the UK by direct train services — this week seem unaffected by the BA strike, with return fares available from £130 over the strike dates.