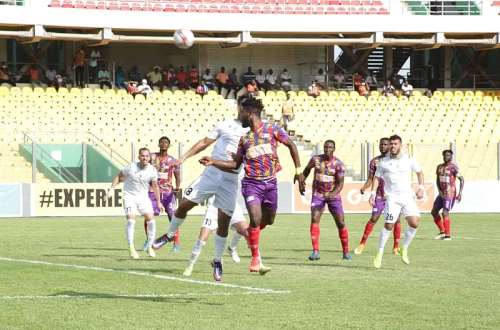 Ibrahim Salifu and substitute Isaac Agyenim Boateng were on the scoresheet for the Rainbow club in each half of the game to give the team the needed momentum after a poor start to the season.

Hearts started the game as they meant to go on, and they were unfortunate to see Kofi Kordzi’s strike from within the six yard box go over the crossbar for the first clear cut chance of the game.

However, the Phobians were rewarded for their impressive start to the game, when Daniel Afriyie-Barnieh teed up Salifu in the 17th minute to break the deadlock and give the home side the deserving lead.

Hearts created quite a number of chances in the opening 45 minutes but could only manage a goal as the opportunities went begging heading into the break.

After the recess, Hearts continued to press for their second of the game as their Algerian counterparts looked content with just a goal conceded with no clear intentions to attack the Phobians.

Goalscorer, Salifu Ibrahim had to be substituted just five minutes into the second period of the game with what seemed like a muscle injury for the Hearts talisman, with Agyenim Boateng taking his place.

Afriyie-Barnieh, who had a good afternoon should have doubled Hearts’ lead after 53 minutes but his header from a Fatawu Mohammed cross could only go into the side net of goalkeeper, Zakria Saidi’s post.

Agyenim Boateng then finished things off for Boadu’s side in the 73rd minute as he tapped into the net after the net after a cut back from left-back, William Denkyi. His goal made it 2-0 for the reigning Ghana Premier League champions.

The Saoura keeper, Saidi, was sent off with 15 minutes to go for a foul on Barnieh after failing to get to the ball before the Hearts forward. But the home team could do very little to add to their two-goal advantage as referee, Abdel Hussein blew his whistle for full time.

Hearts will go into the second-leg with a two-goal advantage and hope not to repeat the same mistakes they did against Wydad Athletic Club in the preliminary round of the CAF Champions League.