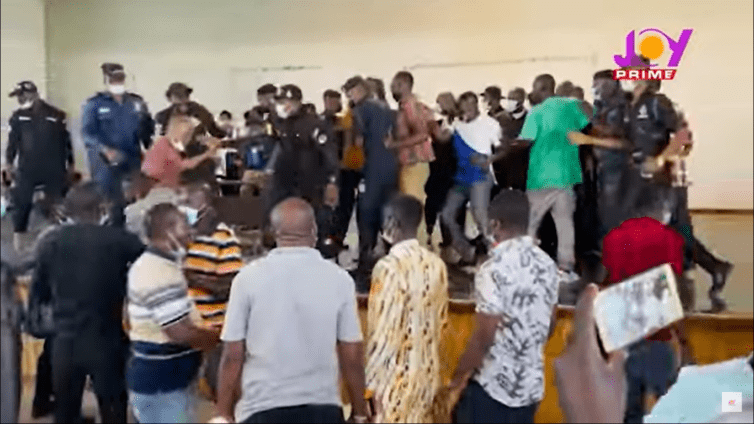 The members of Cape Coast Metropolitan Assembly have blamed the Electoral Commission (EC) for the chaos the characterised Sunday’s confirmation of the President’s nominee for MCE, Ernest Arthur.

Mr Arthur had been rejected twice by the assembly members but had one more chance to secure two-thirds of the total votes cast.

Although Mr Arthur polled 45 out of the 63 total votes cast to claim the position, the voting did not go on smoothly as a fight erupted after an unidentified person allegedly snatched some ballot papers.

In an interview with JoyNews’ Richard Kwadwo Nyarko, some assembly members said they were very disappointed since the EC decided to continue with the collation even though some ballots had been snatched.

They mentioned that although they had earlier pledged to be decorous, the EC failed to hold up their end of the deal.

“We requested that there was an agent, but the EC did not have any agents when they started counting. This, we find very unlawful.

“After that, you saw all the things that happened. Somebody came to snatch some of the papers; so we didn’t even know the number; we didn’t know what was going on. Everything was messed up, and we blame the EC for all this,” one of them said.

However, 45 minutes after the entire commotion, Ernest Arthur was sworn in at a brief ceremony at the Centre for National Culture in Cape Coast.

According to the now confirmed MCE, the chaos has been a drawback as it’s the handiwork of the Cape Coast MP whose party faithful were not in support of his nomination due to the political differences.

He, however, stated that the division in the assembly would not reflect his work because he is not a divisive person.

“I will work together in harmony with elected and appointed members in the area,” he assured.

DISCLAIMER: The Views, Comments, Opinions, Contributions and Statements made by Readers and Contributors on this platform do not necessarily represent the views or policy of Multimedia Group Limited.
Tags:
Assembly Members
Cape Coast Metropolitan Assembly
Chaos
Electoral Commission
Ernest Arthur