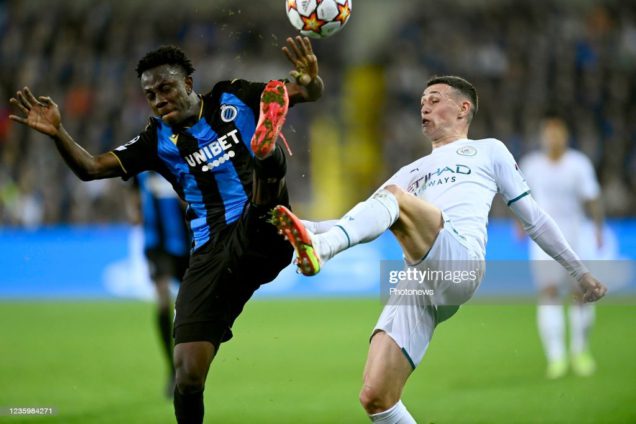 Tuesday’s UEFA Champions League games saw three Ghanaian players named among the squads for their respective teams ahead of the return of the competition.

While two of the three players ended up on the losing side, the other was an unused substitute as his side cruised to a comfortable victory.

Kamal Sowah, Edmund Addo were all in action on Tuesday but Mohammed Kudus was only fit for the bench.

Sowah, who had started the two previous Champions League games for Club Brugge, was once again named in the starting starting line-up in their home game against Manchester City.

The Ghanaian youngster enjoyed 56 minutes of action as they were thrashed by the Premier League champions, with fellow African Riyad Mahrez hitting a brace in the game.

Sowah completed just one of his three attempted dribbles and didn’t enjoy the best of nights.

At the San Siro, Addo was restored to the starting XI for Sheriff Tiraspol in their fixture against Inter Milan.

The central midfielder was looking to add yet another victory to his name in the competition but the Italian side proved too strong for the Moldovans.

The youngster was taken out in the 75th minute of the encounter after his team had conceded all three goals.

However, while his team may have suffered a defeat, the game adds more experience to the Ghanaian’s career with a reverse fixture up next in the competition.

Kudus was named on the substitute bench for the second consecutive Champions League game this season.

Despite scoring four goals against Borussia Dortmund, the 21-year-old didn’t get any chance to feature as he still continues to wait for his first taste of minutes in this season’s competition.

On Wednesday, Malik Abubakari will be hoping to get the nod in the starting team when Sweden’s Malmo come up against Chelsea at the Stamford Bridge.

The forward is yet to start a game in the competition for Jon Dahl Tomasson’s men, but has managed two cameo appearances – against Juventus and Zenit St. Petersburg respectively.