Champions League: The rules players are following during 'final eight' in Lisbon - MyJoyOnline.com

Champions League: The rules players are following during ‘final eight’ in Lisbon 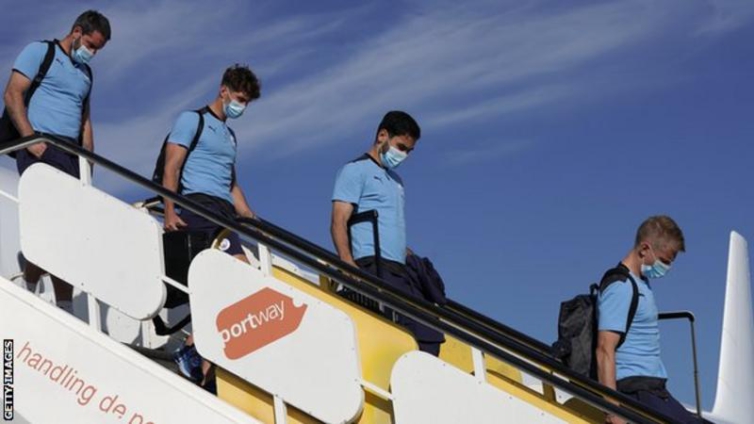 Uefa’s solution to a Champions League competition disrupted by the effects of the coronavirus pandemic is a ‘final eight’ knockout tournament played across 12 days in Lisbon.

Football’s reputation is at stake and, according to Europe’s governing body, the staging of future international matches if protocols are not followed.

in Lisbon, all eight teams and their officials, including Premier League side Manchester City, are required to stick to the rules from a 31-page document.

Some of them will make life very different for the elite of European football.

The beaches and sights of Lisbon will be out of bounds, with players only allowed to leave their hotels with prior agreement – and even then they cannot come into contact with anyone outside their group.

In the hotels, players should have private access routes and a private dining area, while food should only be served by the team’s own staff.

Need your pants washing? Clothes and equipment can only be handled by team staff.

The life of a footballer these days involves plenty of tests for coronavirus and the Champions League bubble will be no different.

Tests were conducted before clubs left for Portugal – two people connected with Atletico Madrid have already returned positive results and not been allowed to travel.

Tests will also be carried out in Lisbon the day before each game. Uefa has promised the results will be delivered – at the latest – six hours before kick-off.

But one or two positive tests could lead to some torn-up team sheets and tactical masterplans.

It is worth noting Uefa’s rules stipulate that provided a team can field 13 ‘A list’ players, plus a goalkeeper, games have to go ahead. If a team cannot do that, they would be allowed to bring in any new signings who had not been registered.

Uefa would look at the potential for rescheduling on a case-by-case basis. However, given the Champions League final will not be moved from 23 August, the reality for any team not capable of fielding a side is that they would probably have to forfeit the fixture.

A mirror in front of the toilet

As if coronavirus tests weren’t enough, there are also drugs tests to think about.

But, to enable the officer to watch from a socially distanced position, players will have a mirror set up opposite the toilet – which might be a little disconcerting.

Planes and buses must be thoroughly disinfected and, “to minimise contact with the general public”, players will be using VIP arrival areas at airports.

The rules for leaving the bus are less glamorous – you just need to remember to use the central door and not get off at the front.

Fans of pre-match gift exchanges will be relieved – pennants can still be swapped before kick-off. But anyone eyeing up Lionel Messi’s shirt will be disappointed, as players are not permitted to swap jerseys.