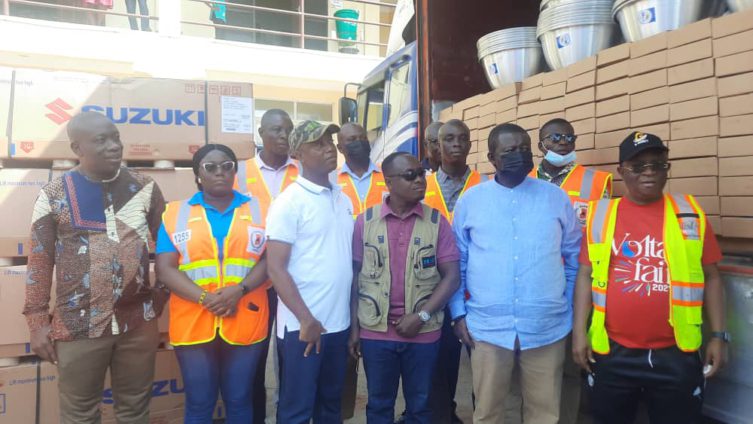 Volta Regional Minister, Dr Archibald Yao Letsa, has admonished individuals and organisations intending to donate relief items to affected tidal waves communities in the region to do so through The National Disaster Management Organisation (NADMO).

Dr Archibald Yao Letsa made the comments when Jesus Christ of Latter-Day Saint Church and the Coastal Development authority presented trucks of relief items to NADMO to be distributed to the three affected districts.

While commending the individuals and organisation for showing love and support towards the people in the affected communities, he noted that the items must be channelled through the NADMO for a well-coordinated distribution.

He said everyone affected would be able to receive a part of the donated items.

“We are grateful for all donations coming through for my people, but I wish to plead with anyone or organisations interested in donating to channel the items through the NADMO for proper documentation and distribution, “Dr Letsa said

More relief items continue to be delivered to victims of the recent tidal waves disaster that hit the three coastal districts of the Volta Region.

The latest donation came from the Jesus Christ of Latter-Day Saint Church and the Coastal Development Authority.

The items include clothes, 600 pieces of mattresses,  bags of rice, several boxes of soap, bowls and 30 outboard motors from the Coastal Development Authority.

Director-General of NADMO, Mr Eric Nana Agyemang Prempeh, expressed gratitude to the church for the donations and urged others to emulate their kind gesture.

He noted that relief items during disasters are only short-term interventions. What is most important is the medium and long term, which is restoring the people’s livelihoods.

The Regional Director of Coastal Development Authority, Mr Dela Ndor, has also disclosed that loans will be given to people especially women affected by the tidal waves and outboard motors at a reduced price which would be paid for 12 months.