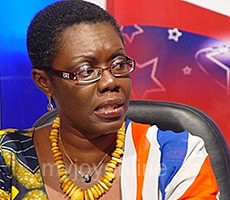 The last of a three-day emergency sitting by Members of Parliament to debate loan agreements and other parliamentary businesses was marked by chaos.

Member of Parliament (MP) for Madina and Ursula Ekufful, MP for Ablekuma West got into a heated argument after the latter claimed she had been insulted by the Madina MP.

Again the Minority and Majority got into a disagreement on whether the approval of Dr Ekwow Spio-Garbrah as Trade Minister should be deferred. The MPs accuseed Dr Spio-Garbrah of failing to admit that he once described some ministers as incompetent.

The House had been debating a report by the Finance Committee on a commercial credit facility between Brazil and the government of Ghana for a 485,000-dollar loan for a traffic lighting project.

Not convinced by the report on the loan, the Minority, led by KT Hammond and Kwaku Kwarteng, said government was only going to use the loan to patch up potholes on the road.

Ursula Ekufful re-echoed this view during her contribution to the debate, according to Parliamentary Correspondent, Elton John Brobbey.

But angered by this, Amadu Sorogo said the Minority members were being propagandists.

He also said Mrs Ekufful  lacked the competence and maturity to discuss the loan agreement because she has come from an ill-informed position.

A furious Ursula requested that Mr Sorogo retracts his comments and apologise.

Although Mr Sorogo did apologise, he denied making the comments attributed to him.

Meanwhile, the loan was approved, and the appointment of Dr Spio-Garbrah also got approved as Trade and Industry Minister.

Parliament has been debating some loan agreements and other government businesses in an emergency session that begun Wednesday.