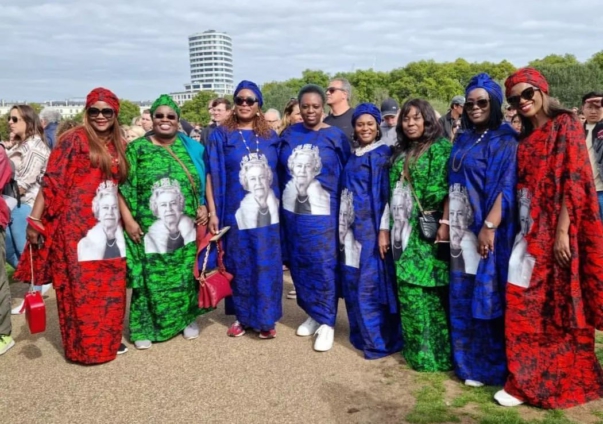 Many people who attended the funeral service for Queen Elizabeth II including the world service showed up in black outfits.

But some Nigerians in the UK wanted to go all out for the late monarch and honour her in a big way possible.

These Nigerians on Monday went viral after joining thousands of mourners in London in their colourful and beautiful ‘Asoebi.’

The Asoebi was in three colours – green, blue and red – all with a picture of Queen Elizabeth II placed boldly on the front.

On Instagram, the founder of Ovation Group, Dele Momodu, revealed that the costumes were made in four days and delivered to London a day before the funeral.

He stated that after the asoebi went viral, the Palace requested the outfit be displayed at the London museum.

“It started as a joke and one of us took it seriously. The outfits were turned around in four days and delivered from Lagos to London the day before the event.

It went viral, was on sky news and the Palace have now requested for it to be displayed at London Museum,” Mr Momodu’s posts read.

Meanwhile, in Tottenham, some Ghanaians also held their own funeral – the Ghanaian way – in honour Queen Elizabeth II.