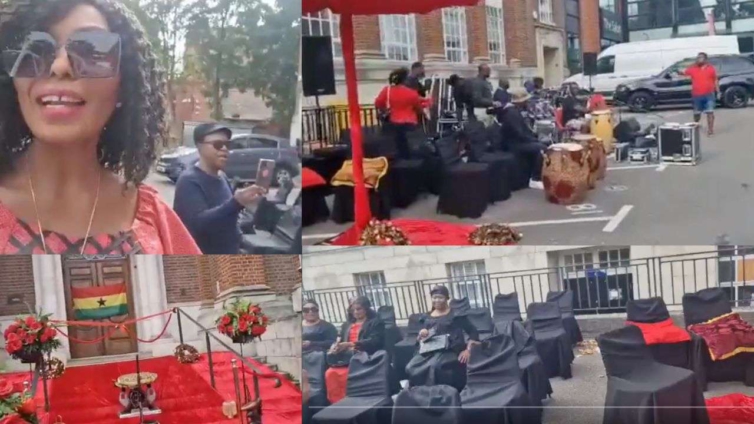 Queen Elizabeth’s coffin came to its final resting place at Windsor after completing its long journey from Balmoral Castle to Edinburgh, then from Buckingham Palace to Westminster Hall and Westminster Abbey, and then finally to St. George’s Chapel in Windsor Castle.

The state funeral was attended by leaders from across the globe and thousands of mourners lined the streets to pay their final respects to the Queen, after her funeral earlier in the day.

While this was going on, some members of a Ghanaian community in the UK decided to hold their own funeral service for the Queen.

In a video that has gone viral, some people were seen dressed in red and black Ghanaian apparel lining the streets of Conel, in Tottenham, North London.

The front of the building where they stood was decorated with red clothes mostly seen at Ghanaian funerals and lined with chairs also covered in black clothes.

A live band was also set up at the venue playing mainly Highlife-inspired tunes heard at numerous Ghanaian funerals.

The lady who was seemingly part of the organisers urged Ghanaians in London to join them mourn the queen in their own way.