Chief Justice taking on Dr Ayine is an overkill – Baako 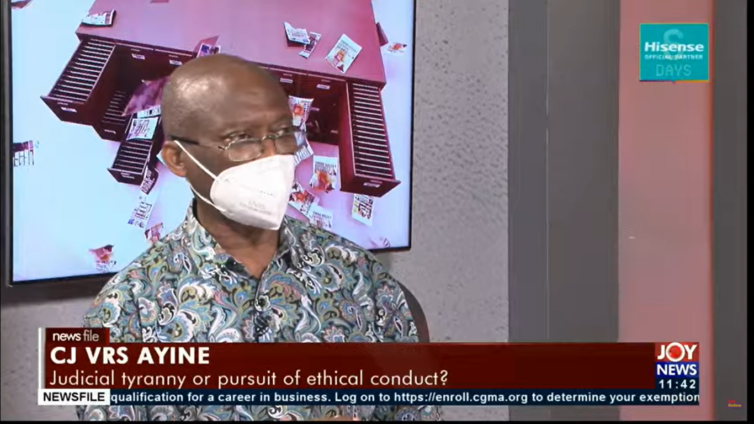 The Editor-In-Chief of the New Crusading, Guide Kweku Baako Jnr

The Editor-In-Chief of the New Crusading Guide has described as an “overkill”, the Chief Justice’s decision to drag the Bolgatanga East MP before the disciplinary committee of the General Legal Council (GLC) over comments he made against the Supreme Court.

Abdul Malik Kweku Baako Jnr on JoyNews’ Newsfile Saturday, called on Kwasi Anin-Yeboah to accommodate Dr Dominic Anyine’s comments for which he has been hauled the Council for investigation.

According to him, the outspoken legislator was at an “appropriate forum” dubbed “Judicial Dialogue Review Series,” therefore, his comments must be considered a constructive criticism instead of an attack against the Judiciary.

“This forum, I think it is an appropriate one that should enable and allow criticism of any judicial pronouncement or verdict. And I think within that context, I am prepared to be charitable, liberal and accommodating.

“But perhaps the CJ’s thing is an overkill, in my candid opinion. Here was a situation where it was a give and take. Judicial decisions being subjected to criticisms is normal and constructive so generally speaking, I think we should be able to accommodate that situation and allow it to pass,” he told host Samson Lardy Anyenini.

Dr Ayine, a member of former President Mahama’s legal team during the 2020 Election petition, questioned the judiciary’s independence about how the Supreme Court arbitrated the Election Petition.

He made a similar statement during the hearing of the petition at a press briefing on February 16, 2021. The MP was found guilty of contempt of the Supreme Court but was discharged after he apologised.

In the petition filed to the General Legal Council, the Judicial Secretary, Cynthia Pamela Akotoaa Addo, stated that Dr Ayine’s alleged repeat of such statement has displeased the Chief Justice, thus the call for him to be investigated.

Meanwhile, the Executive Director of the Ghana Center for Democratic Development (CDD-Ghana), Professor Henry Kwasi Prempeh,has said that the act threatens every lawyer’s right to freedom of speech in the country.

He added that it will “impact negatively on both academic freedom and the freedom and ability of civil society to promote judicial accountability, including through projects like the Judicial Review series.”