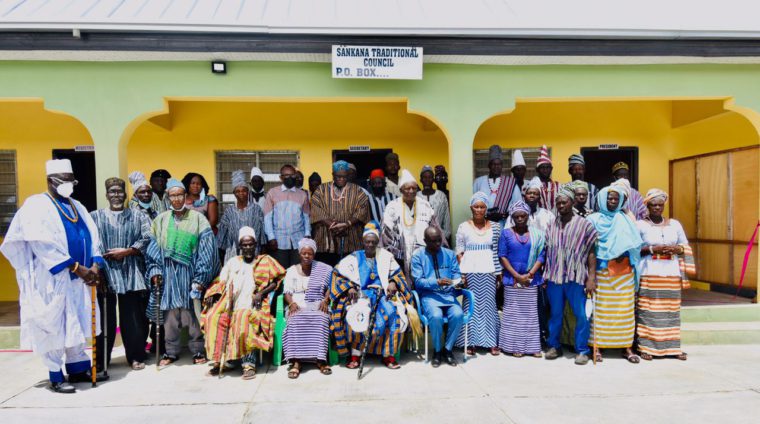 The Minister for Chieftaincy and Religious Affairs, Ebenezer Kojo Kum has inaugurated the Traditional Councils for Sankana, Takpo and Manwe in the Upper West Region.

The Minister, whose mandate among other things, is to promote the utilisation of Chieftaincy and Traditional values to serve as a basis for wealth creation and socio-cultural empowerment, supervised the swearing of oaths by the Paramount Chiefs, Divisional and Sub-chiefs as well as Queen Mothers of the Districts by the Wa Circuit Court Judge.

Speaking at the ceremony, Mr Kum urged the Traditional Councils to work with security agencies to ensure that people do not hide behind chieftaincy issues to disrupt the peace of the area and its adjoining communities.

“I wish to call on you to explore your traditional reconciliatory practices in the resolution of conflict within your areas. Parties in disputes are also advised to avail themselves of the laid down procedures in the Chieftaincy Act 2008, Act 759 to settle all disputes. By this, all legal issues connected with the disputes can be exhaustively dealt with to the satisfaction of all.

“I hope the Takpo Naa and his chiefs would take the opportunity to prove to skeptics that the chieftaincy institution is ready to take the appropriate steps to better the lot of its community members. There is no gainsaying therefore that the inauguration of the Takpo Traditional Council could be a game-changer and a giant step to support government to eliminate outmoded customary practices,” he said.

He further noted that chiefs are the center of discipline in rural communities; therefore they should ensure all Covid-19 protocols are adhered to during all gatherings.

“Another area the government seeks your support in, is the fight against the Covid-19 menace. We seek your cooperation to canvas against the spread of Covid-19 by calling on your people to observe the Covid-19 protocols especially during funerals, festivities, in markets and other social gatherings.

“The President and the NPP government are working tirelessly to secure vaccines to vaccinate at least 20 million citizens and residents in Ghana. Please avail yourselves for the jabs when the vaccines are made available. We will count on you to achieve this feat.”

Naa Mornah, on his part, commended the government and the Ministry as well as the UWRHC for taking the necessary steps to ensure that the Sankana Traditional Area attained a paramountcy status adding that “The road to paramountcy was quite long and rough.”

“Within my reign as paramount chief, I envisage my leadership as service to mankind and my people, the foundation of my followers,” Naa Mornah said and appealed for the needed support to succeed.

He appealed to the authorities to help connect the rest of the traditional area to the national grid, especially the Council’s Secretariat, and to improve access to potable water.

Naa Dikomwine Domalae, the Paramount Chief of Daffiama Traditional Area and President of the Upper West Regional House of Chiefs (UWRHC), the Registrar of the UWRHC and the Chief Director of the Ministry of Chieftaincy and Religious Affairs, were present at the inauguration ceremony.