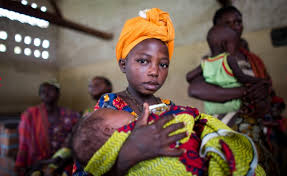 The Western Regional Director of the Department of Gender, Maribel Akuorkor Okine says child marriage is a crime punishable by law.

She said Section 109 of the Criminal Offences Act (Act 29) criminalizes compulsion of marriage. It states that “whoever by duress causes a person to marry against his/her will, shall be guilty of a misdemeanour, and the punishment is a fine or imprisonment of up to three years”.

She, therefore, called on affected individuals to report such incidents to the Police, the Minister/Ministry of Gender, District Girl’s Education Unit and Committees on Child Protection among others.

Ms Okine was speaking at an engagement with Imams and opinion leaders during community-based advocacy sessions, sensitizing them on the dangers of child marriages on the girl child and its attendant effect on their communities and national development.

The meeting, which was a collaboration between the United Nations Population Fund (UNFPA), and the Canadian Government under the auspices of the Western Regional Coordinating Council (WRCC) was for participants to brainstorm possible practical solutions to child marriage within their communities.

She explained that the meeting was to strengthen their knowledge on the subject and to enable them to speak out as advocates for children, drawing on the teachings of their faith to promote respect for the rights of children.

Ms Okine stressed the need for strong partnerships among communities and opinion leaders in curbing harmful practices like child marriages and the abuses that emanate from the act.

Such marriages, she said, often lead to early divorce, broken homes, hardships on families, health issues that put pressure on health facilities, domestic violence, under-development of talents, lack of education, poverty and other potentials, and even death.

She listed poverty, insecurity, negligence, truancy, neglect of parental responsibility, inadequate implementation of the laws on child marriage, low education, discrimination against the girl child, cultural practices and teenage pregnancy as some of the factors that lead to child marriages in Ghana.

Physician Assistant (Medical) at the Effia-Nkwanta Regional Hospital (ENRH), Dr Ernest Obeng who spoke on the health implications of child marriage lamented that owing to their young age, the pelvis of these victims tend to be immature and not ready to accommodate pregnancy thereby leading to stretches which may damage the womb.

He stated that the effects of child marriage on the girls could lead to acute urinary infections (AUIs) miscarriages and later pregnancy implications like birth injuries, premature labour or prolonged labour.

Dr Obeng, therefore, called on parents to strive to provide the needs of their wards, give them equal access to education as their male counterparts, equal access to health, keeping an eye on them and building relationships with them to identify with their challenges.