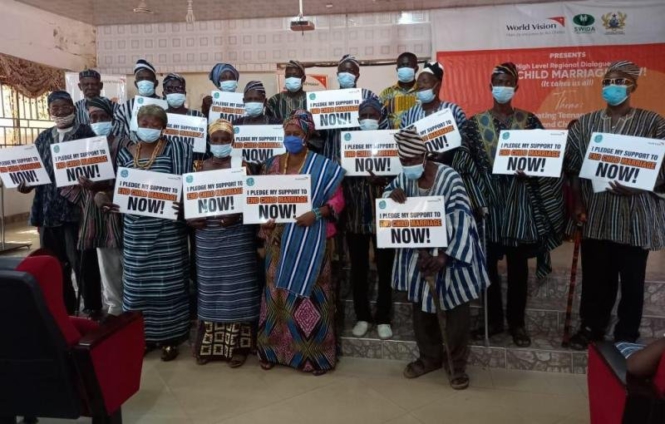 According to the group, the practice undermines the growth and development of young girls and robbed the nation of productive youth who could contribute towards national development.

The dialogue was organized by the WVI in partnership with the Savanna Women Integrated Development Agency (SWIDA-GH) and attended by traditional and religious leaders, Queen mothers, law enforcement agencies and policymakers.

It was to enable participants to discuss and determine the roles each institution could play to help protect young girls and to combat child marriage practices in some communities.

Mr Akanpabadai said child marriage destroyed the ambition of young girls and prevented them from realizing their potentials, adding that it contributed to poverty among families who gave out their girl child for marriage.

“We conducted a study in some parts of the Northern Region and we saw that about 59 per cent of young girls sampled said they were not safe in their communities out of fear of being given out for marriage and 24 per cent of parents still feel the need to give out their girl child for marriage, which is very worrying.”

He, therefore, called for the collective commitment of stakeholders to put in place measures that would protect the girl child from the social canker.

The Executive Director of SWIDA-GH, Hajia Alima Sagito-Saeed who facilitated the dialogue called on traditional rulers to be advocates for girl child empowerment in their communities.

“Our traditional leaders must be advocates for the empowerment of our young girls by ensuring that they are educated or given soft skills training so that we can achieve the desired results of having successful women in our society.”

The National “End Child Marriage Now Campaign” Coordinator at the WVI, Madam Barbara Asare Yeboah said the campaign was an initiative to reduce cases of child marriages by five per cent in the country through rolled out interventions that targeted key actors, including traditional and religious authorities, young girls and NGOs, to achieve set out objectives.

She added that the campaign was aimed at influencing national policies that protect children from abuse and also mobilize young people to empower them and build their capacities to be lead advocates against child marriages in their communities.

The Savannah Regional Minister, Mr Saeed Muhazu Jibril in a speech read on his behalf, commended WVI and its partners for organizing the event, and urged participants to impart the knowledge they had acquired to other members of their communities to influence behaviour change to help achieve the desired results.

Participants present at the meeting took turns to pledge their commitment to end child marriage to help accelerate development in their communities.