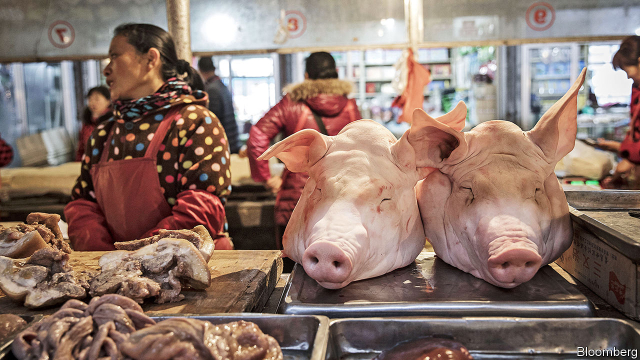 Like most small restaurants in this rural part of Wan’an county in Jiangxi province, the Little Wealth God does not have a menu. Diners go directly to the kitchen to pick vegetables, fish and raw meat and let the chef know how they would like them cooked.

But due to its spiralling price, China’s most popular meat, pork, is nowhere to be seen. Instead, many locals are opting for a traditional dish that had lost appeal until recently.

“Why not choose dog meat if you want some meat?” the waiter recommended, adding high prices meant most diners no longer felt it worthwhile to order pork.

Renewed interest in dog meat is just one of the side-effects that a massive pork shortage, caused by the African swine fever epidemic, has created across China, the world’s largest producer and consumer of pork, which accounts for more than half of the meat eaten globally.

As pork prices continue to soar, discontent is growing among the public, especially among low-income groups. It is also dampening consumer sentiment and belies Beijing’s attempts to convince people of the country’s bright economic future.

In a supermarket in the county’s town centre, the price of lean pork was 72 yuan (US$10) per kilogram while pork rib cost 74 yuan (US$10.50) a kilogram – more than double what was being charged a year ago and at least as high as prices in major cities like Shanghai and Beijing.

Given consumers’ reluctance to buy pork at that price, the supermarket has a promotion on rabbit, selling it nearly two dollars cheaper than usual at 43.6 yuan (US6.50) per kilogram. The only pork item less expensive is a leg bone with almost no meat attached.

The sharp rise in the price of pork is especially hard for residents of Wan’ an, which was officially labelled as a “county of poverty” by Beijing until 2018. The average salary is about 2,500 yuan (US$353) a month – a third to a quarter less than those in large Chinese cities.

At wet markets outside Wana’an’s town centre, most pork vendors have gone out of business because few rural residents, whose incomes are even lower than the county average, can afford it, according to Liu Gang, a villager in Jian county in Jiangxi.

“It’s not only expensive, but it’s also hard to purchase pork meat in rural villages,” Liu said. “Many pigs died in nearby pig farms due to African swine fever earlier this year.”

And there is no sign China’s pork crisis will be over any time soon. China’s National Bureau of Statistics said the average price of pork nationwide shot up 69 per cent in September from a year earlier, pushing the consumer price index up to 3 per cent, the limit of Beijing’s inflation tolerance for 2019. Prices are expected to rise further given the continued decline in the country’s stock of pigs.

African swine fever has swept through China’s pig population, leading to mass culls that are expected to take years to recover from.

The country’s live hog population, which accounted for about half of the global total in 2018, had fallen 41.1 per cent at the end of September from a year earlier, according to a survey of 400 counties by the Ministry of Agriculture and Rural Affairs. It is unclear how much further it will fall before it bottoms out.

The Chinese government has instituted emergency measures to boost pig supply, trying desperately to help farmers expand production while scrambling to import pork to sure up supply. China’s imports of pork rose 43.6 per cent to 1.32 million tonnes in the first nine months of this year, according to China’s General Administration of Customs.

But China’s demand for pork is so large that not even global supply can fill the gap, forcing residents like those in Wan’an to treat the meat as a luxury for a long time to come.