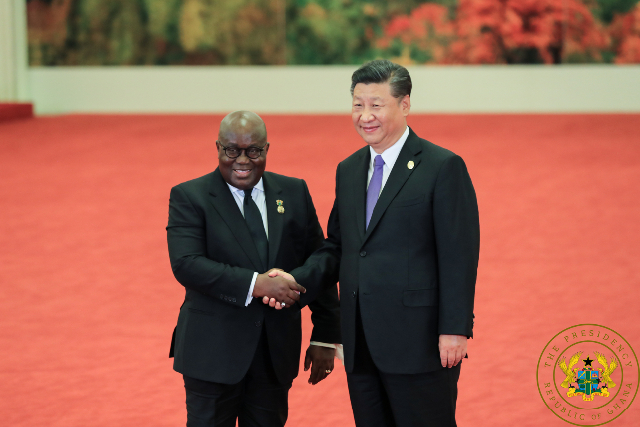 More critics are emerging following billions of dollars quid pro quo between Ghana and China signed earlier this month – a deal that would allow China to dig and export a hefty portion of Ghana’s natural resources.

At a joint public forum between Joy News and IMANI, an African policy and education think tank group, senior financial consultant Kofi Bentil asserted that the deal with the Chinese could result in a categorical disaster.

“Every Chinese gift is a trojan horse. If we don’t use it well, it could end up poorly for us,” said Bentil, who currently serves as the senior vice president of IMANI.

He maintained that the Chinese may not have bad intentions, but if Ghanaian government officials fail to think wisely, the result could be like former deals with the Asian country that have since gone sour.

“We always welcome China’s approach to strengthening the scope of Africa,” he continued. “But Africa needs leaders that will negotiate well,” adding that in the past, our relationship with the Chinese ebbed and flowed because “we did not do our homework well.”

Other critics argue that accepting the multi-billion-dollar barter (which will see China hydro deliver infrastructure worth $2billion in return for processed bauxite) goes against President Akufo-Addo’s pledge to build a “Ghana Beyond Aid,” an initiative designed to build Ghana as a superpower without necessarily relying on international support.

At a graduation ceremony Monday, former President John Kufour scoffed at Akufo-Addo’s idea stating that “we don’t just get up and say no to aid.”

Instead, he lamented, aid from foreign interests should be accepted until the country can sustain itself on domestic resources.

“No one comes here because they love us,” he acknowledged. “They come for what they can get, and we must also know what we want from them and negotiate.”

Under the Joint Commission on Economic, Trade and Technical Cooperation, Ghana will receive Chinese support for the development of the power, transport, telecommunications, education and municipal sectors.

The deal – to be signed every four years – will be overseen by Ghana’s Finance Minister, currently Ken Ofori Atta, and China’s Vice Minister of Commerce, Qian Keming.

“The statement ‘Ghana is blessed with a lot of natural resources’ has now become a cliché,” reads a statement from the Government of Ghana’s website. “It has been used in many write-ups and conferences to highlight the natural wealth God gave Ghana, which, if prudently exploited and managed, will lift Ghana beyond foreign aid.”

To that end, “Ghana Beyond Aid” was developed to build an economy that can thrive without “charity and handouts,” said Akufo-Addo at an Africa CEO’s forum in Switzerland earlier this year.

“We want to build a Ghana beyond aid; a Ghana which looks to the use of its own resources,” and “will look at the proper management of its resources as the way to engineer social and economic growth in our country.”

So to accept billions of dollars from the Chinese has furled some eyebrows, including those of Dr. Lloyd Amoah, the Acting Director of Asian Studies at the University of Ghana. From what Amoah finds, Ghana is not suitably prepared to deal with China, he told Joy FM Tuesday.

Meanwhile, Information Minister Kojo Oppong Nkrumah explained to Joy News’ Daniel Dadzie that a $50 billion Century Bond currently under consideration by the government is because of Ghana’s quest to shore up its resource mobilisation efforts.

“If you look at the global financial markets all over the world, you are finding two things: They are improving domestic resource like we are doing in Ghana…and we are also looking at finding cheaper, longer-term financing to complement that,” said Nkrumah.

He continued: “The Century Bond that has been done in other parts of the world is a good opening. It helps you to refinance some of your short-term expensive instruments and gives you more fiscal space. It gives you more resources to stretch over a period to deliver more value.”

In a short ceremony in China, Akufo-Addo told Jinping that “this will provide us with the resources to finance our infrastructural and industrial development. We are hoping that, at some stage, China will interest itself, and take a part of it (century bond) as China’s contribution to Ghana’s development.”

But Kufuor insists that if Ghana can attract investments and create employment, the country will reach a point where other countries will view Ghana as equals, thus limiting our need for aid.

He further added that asking for aid should be done so only to “empower us to build our negotiating skills so that we get fresh air around the negotiating table from the East and West.”