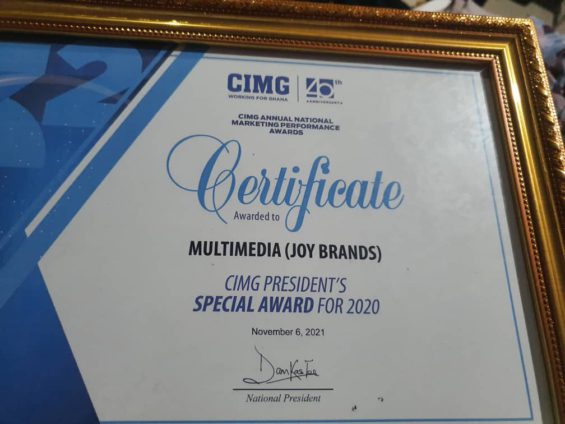 Two brands of the Multimedia Group, Joy and Adom clusters, have received the Chartered Institute of Marketing Ghana (CIMG) National President’s Special Awards, 2020, at a ceremony held on Saturday.

The Ekosiisen show on Asempa FM was also adjudged the CIMG Radio Programme of the Year – the second of such honours in three years.

The CIMG, in a citation for Joy Brands, said, “What began as a single radio station in 1995 is today the nation’s largest radio, television and online network and Sub Saharan Africa’s biggest media entity which is empowering people and prospering together with them.”

It added, “one of your key jingles Ghanaians have come to like; ‘Radio gets results’ has been used intricately to your advantage.”

The citation goes on to list some of the many stories which have gotten results through the Joy platform, including;

The citation ends with a note that the Joy Brand was awarded the President’s Special award because the President of CIMG and the governing council have been following the exploits of the Joy Brand and deem it appropriate and befitting to confer the award on the station.

Head of programmes at Joy FM, Edem Knight–Tay, who received the award on behalf of the Brand, was grateful to clients, partners and the audience worldwide.

She mentioned that the award ‘only means that we need to continue to do more.”

She promised that the Brand will continue to do more “because this job is not about us, it’s about the people. So for as long as we put them first and make them happy, then we are also happy.”

DISCLAIMER: The Views, Comments, Opinions, Contributions and Statements made by Readers and Contributors on this platform do not necessarily represent the views or policy of Multimedia Group Limited.
Tags:
Adom FM
CIMG Awards
Joy FM
The Multimedia Group