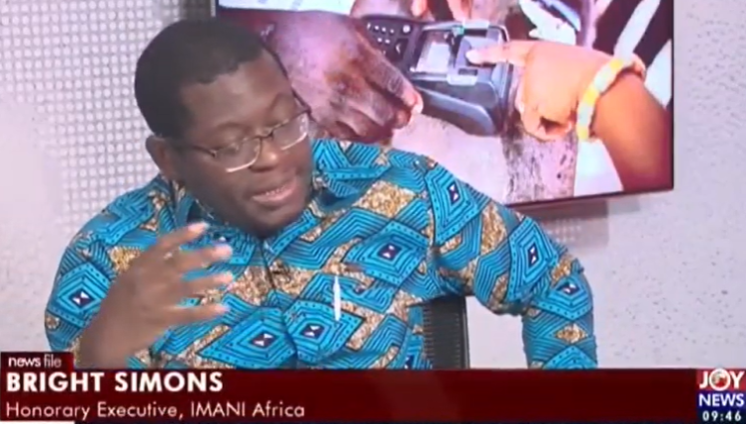 Think tank, IMANI Africa has dismissed claims of a bloated voters’ register in the Volta Region prior to 2020 as a complete fantasy.

Honorary Vice President, Bright Simons said that there is no evidence to suggest the old voters’ register was infiltrated to even warrant a compilation of a new electoral roll.

Speaking on Newsfile Saturday, he said the increased voter numbers in the Volta Region corresponds with the increase in the national tally.

“The suggestion that somehow there is something suspicious going on in Volta is completely apocryphal and high fantasy. There is no evidence whatsoever that there is something peculiar about the situation in the Volta Region” he said.

According to him, the Volta Region (Oti Region inclusive) in the year 2000 had 983,000 registered voters on the electoral roll and over the period it has seen a 35 percent increase in that number.

Currently, the Volta and Oti Regions combined accounts for about 1.4 million voters on the new register.

The Vice President of IMANI Africa said: “If you compare that to Ashanti Region where in 2000, they had less than 2 million people, today they have almost 3 million which represents 50 percent increase.”

The Electoral Commission (EC) said the old voter register compiled in 2012 was not credible.

Prior to the compilation of the new voters’ register, NPP MP for Adansi Asokwa K. T. Hammond said the deployment of soldiers to the Ketu South of the Volta Region was purposely to prevent neighbouring Togolese from crossing over into Ghana to partake in the process.

In 2015, the Running Mate of Nana Akufo-Addo, Dr Mahamudu Bawumia alleged the NPP uncovered evidence that shows that close to 80,000 Togolese had registered as Ghanaians in the voters’ register, giving rise to the need for a new roll.

The opposition NDC debunked all these claims, however, the EC remained resolute and went ahead to compile a new electoral roll.

Bright Simons questioned the veracity of claims of Togolese nationals registering to vote in Ghana and wondered how much of an impact that can have on the national election.

“Do you know the logistical feet involved in bringing enough people from Togo to register to a point where it can impact a national election? In a register that we have 17 million people, you’ll need to bring about a 100,000 people or thereabouts.

Do you know the number of vehicles you will need? Do you know the impact on border crossing and what it will mean for normal flow of goods and services?” Simons questioned.

He debunked all the claims of a bloated register, insisting the figures from the Volta Region is consistent with trend analysis of the electoral cycles in the past.