Coalition of Progressive Forces embark on demonstration in Northern Region 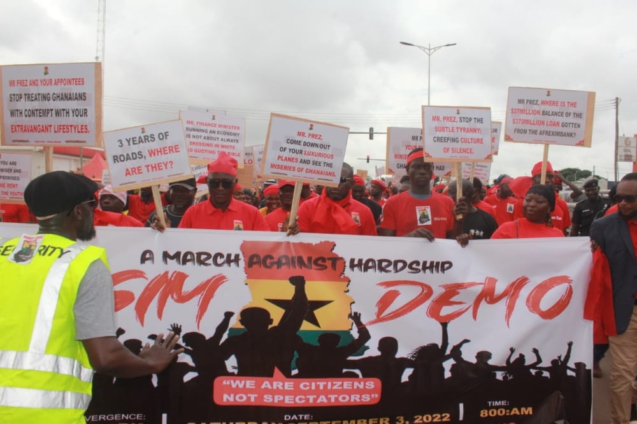 A group called the Coalition of Progressive Forces in the Northern Region has embarked on a demonstration against what it said is the worsening plight of Ghanaians.

The demonstration was to amplify sentiments such as rising youth unemployment, corruption, soaring food prices, transportation, hikes in fuel prices, the skyrocketing cost of rent, poor road networks among others.

Clad in red and black attire, the protestors chanted war songs amidst wielding placards with inscriptions such as ‘Ghanaians are not happy having you as president’, ‘Mr President stop the subtle tyranny and unleashing of attack dogs on critics’, ‘Ghana is drowning in misgovernance’ and ‘Nepotism galore.”

Many of those who took part in the protest were the youth, farmers, petty traders, teachers and business operators.

Lead Convener, Prof Jasper Ayalazoma speaking to the media said said prices are shooting through the roof making live on bearable for Ghanaians.

“When we did our community engagement the farmers are saying they have to reduce the size of their farms because they couldn’t buy fertilizer and other farm inputs. So no wonder this time of the year we normally have abandoned of food you see that the food prices are still high,” he said.

He said the behaviour of the government shows they are not in touch with the hardship Ghanaians are facing.

“A week ago, the President was here and the message he had for us was ‘Ghanaians are lucky to have him as President.’

“When people are crashing under economic hardship they expect their leaders to empathise with them but what did he do? He was rather showing arrogance,” he noted.

On his part, the Northern Regional Secretary of the National Democratic Congress (NDC), Mohammed Abdul Salaam, commended the organisers for giving the populace a platform to vent their anger on the government.

The Regional Secretary called on the President and the Vice to peacefully resign and allow Ghanaians to pick a competent person to manage the county.

A member of the governing New Patriotic Party who joined the protest said the Akufo–Addo administration is leaving a bad legacy for the party.

“This is not the NPP party we use to know and I want to appeal to Akufo–Addo to sit up because he is leaving a bad legacy for the party.”

DISCLAIMER: The Views, Comments, Opinions, Contributions and Statements made by Readers and Contributors on this platform do not necessarily represent the views or policy of Multimedia Group Limited.
Tags:
Coalition of Progressive Forces
Cost of living
Demonstration