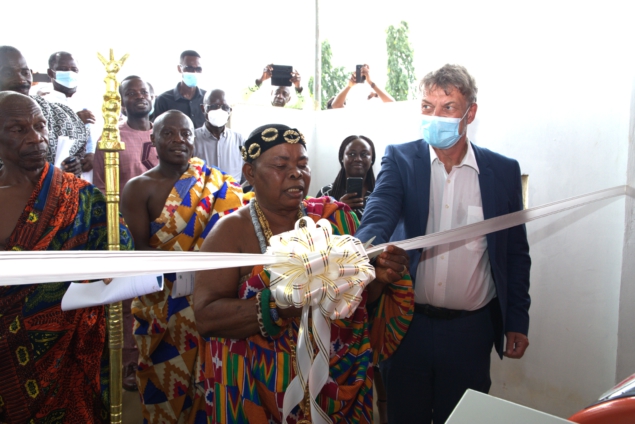 After 14 years of shutdown, Coastal Groves Limited, a wholly-owned Ghanaian organic orange juice processing factory in the Central Region of Ghana, has been re-commissioned by the Deutsche Gesellschaft für Internationale Zusammenarbeit (GIZ) GmbH.

It was executed on behalf of the German Federal Ministry for Economic Cooperation and Development (BMZ) through its “Invest for Jobs” programme.

“Invest for Jobs” is the brand of the Special Initiative on Training and Job Creation, implemented among others by GIZ.

The ceremony was marked by the official handover of a steam boiler valued at around 73,000 euros, and a retooled factory of over 94,000 euros to the management of the company. The event also offered the management of Coastal Groves Limited and GIZ Ghana the platform to further engage on the outlook of the factory and organic agriculture in Ghana.

Delivering his speech at the event, Head of Sustainable Economic Development at GIZ Ghana, Gerald Guskowski, pointed out the importance of such projects, which have a high impact on employment, market opportunities, environmental sustainability, and, above all, improve the business ecosystem.

The agricultural sector in Ghana, he explains, serves as a primary source of employment, livelihood, and food security for most people in rural communities.

The sector, he further explains, accounts for one-fifth of the country’s Gross Domestic Product (GDP) and employs nearly half of its labour force. However, the agro-processing subsector remains a pale shadow of itself, accounting for only 5% of annual output.

According to Mr. Guskowski, “the project is envisioned to create 200 direct jobs and over 1,000 indirect jobs while improving the working conditions of the people who are currently employed by the company.”

On his part, Managing Director of Coastal Groves Limited, Daniel Danquah, expressed his gratitude to GIZ and the German Federal Government. “The shutdown of the factory did not only affect me and my family but also the employees and farmers who provided us with the raw materials for production,” stated Mr. Danquah.

According to him, Coastal Groves owns farmland of about 250 acres under cultivation, and with the factory in operation, it will provide yet another employment opportunity for the youth in Asebu and its environs. Coastal Groves has developed 2,000-plus out-grower schemes that will supply raw materials to the factory, he added.

Through the intervention of “Invest for Jobs”, Sagevest, an investment holding company in Accra, has partnered with Coastal Groves to invest additional funds of over 110, 000 euros to make this dream a reality.

Additionally, with the support of the BMZ’s Sustainable Employment through Agribusiness (AgriBiz) project, GIZ Ghana will facilitate Coastal Groves’ organic certification needs to ensure it meets both local and international standards.

Under the Invest for Jobs brand, the German Federal Ministry for Economic Cooperation and Development (BMZ) has put together a package of measures to support German, European and African companies in investment activities that have a high impact on employment in Africa. The Special Initiative on Training and Job Creation (the official title) offers comprehensive advice, contacts, and financial support to overcome investment barriers.

The development objective is to team up with companies to create good jobs and training opportunities in the partner countries, of which there are currently eight, and to preserve them during the COVID-19 pandemic. The aim is also to improve local working conditions. The Special Initiative is implemented by Deutsche Gesellschaft für Internationale Zusammenarbeit (GIZ) GmbH, among others.

Coastal Groves Limited is a wholly-owned Ghanaian organic orange juice processing factory that serves the Ghanaian community with home-grown beverage products and exports orange peels to the European market. The re-commissioned juice processing factory, the company explains, will not only produce organic orange juice but also a cocktail beverage, processed cassava, a banana and orange blend, and mango juice. He called for the government’s support to grow the factory, especially under the One District One Factory (1D1F).

The farmers who were present at the event and the people of Asebu-Kwamankese expressed their joy and were hopeful that the factory would reduce the unemployment rate in the traditional area and the district, in general.