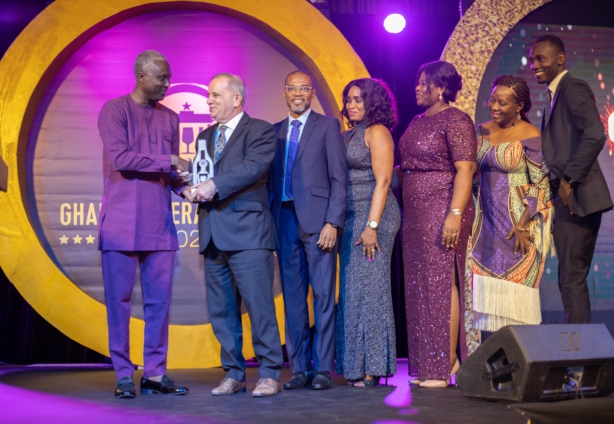 The star-studded event of the 6th edition of the Ghana Beverage Awards (GBA) successfully held at the Kempinksi Gold Coast City Hotel last Friday left patrons wanting more with Coca-Cola carrying the night as the winner of the coveted Product of the Year Category.

Receiving the award, Corporate Affairs Director for West Africa Equatorial Coca-Cola Bottling Company, Bethel Yeboah, expressed gratitude to the organisers and the GBA Committee for recognizing their hard work for the year under review and according to them the needed recognition whiles thanking consumers for their loyalty.

“It is truly a great honour to receive this award. We are excited about this achievement. On behalf of the management of The Coca-Cola Bottling Company of Ghana Limited, I say ‘thank you to all whose contribution has made this possible. To our cherished consumers, we are especially grateful for your loyalty and patronage which has brought us this far.”

He added, “The beverage industry has undergone a lot of dynamism in terms of consumer preferences over the years. For us at The Coca-Cola Bottling Company of Ghana Limited, this is a clarion call in many ways as the awards go to fan aflame the spirit of innovation within us so we can continue to stand tall in providing Ghanaians with the needed refreshment and nutrition.”

“Undoubtedly, the successes chalked over the years could not have been possible without the support of our stakeholders and industry players whose participation and interest in seeing that GBA grows to the level where it will be widely known locally, in the sub-region and internationally knows no boundaries.

“Permit me to also congratulate The Coca-Cola Bottling Company of Ghana Limited, producers of Coca-Cola for coming tops in the keenly-contested Product of the Year category. It is well-deserved,’’ he said.

In the last six years, the awards scheme has been instrumental in shining a spotlight on the local beverage industry, while promoting both local and foreign beverages as well as the participation of small-scale beverage enterprises in Ghana.

It has remained a force to reckon with through its contribution to ensuring that beverage-manufacturing companies are compliant with the highest standards of practice in the production and delivery of their products.

Bitters of the Year: Alomo Bitters

International Beer of the Year: Heineken

Liquer of the Year:  Kpoo Keke