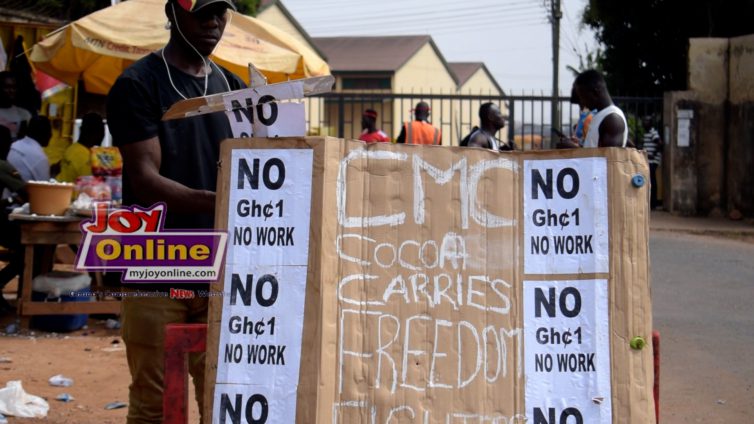 Business activities at Cocoa Marketing Company (CMC) depots in Kumasi came to a halt on Wednesday after cocoa carriers embarked on a sit-down strike.

The action follows the refusal of the companies and their mediators to raise the salary of aggrieved cocoa carriers over the last five years.

On Wednesday, the angry carriers loitered around at the premises of the (CMC) without doing any work.

They had previously dealt directly with CMCs for their wage negotiations, however, the CMCs have contracted third parties to deal with this.

According to the carriers, the current ¢0.62 pesewas for offloading a bag of beans should be increased to ¢1.

Raymond Abanga, the Chairman of the Kumasi Cocoa Carriers Association, said, “We need justice and fairness. Whenever we complain to management, they tell us they have left the responsibility to a contractor. Our salaries are nothing to write home about. Almost all of us are breadwinners.”

The carriers are also worried about what they say are dangers associated with their work as many of them reportedly fall ill after being exposed to chemicals used on the cocoa.

There are also concerns over other work-related injuries.

“I have to carry 64-kilo bags the whole day. We pick the bags from the truck, send them to the lab, then stack it up at the warehouse. We go to the house tired, yet we are paid peanuts,” he cried.

Another lamented “Even soldiers cannot do this kind of work. The cocoa contains chemicals, it gives us rashes. Last year, we lost 10 of our colleagues. Currently, some of my colleagues are disabled and injured.”

The carriers want to directly deal with the cocoa marketing companies in negotiations for improved working conditions.

”We want the CMCs to cancel their contract with any third party regarding our salaries. We can handle our own affairs. The third parties have been cheating us for far too long,” their leader said.