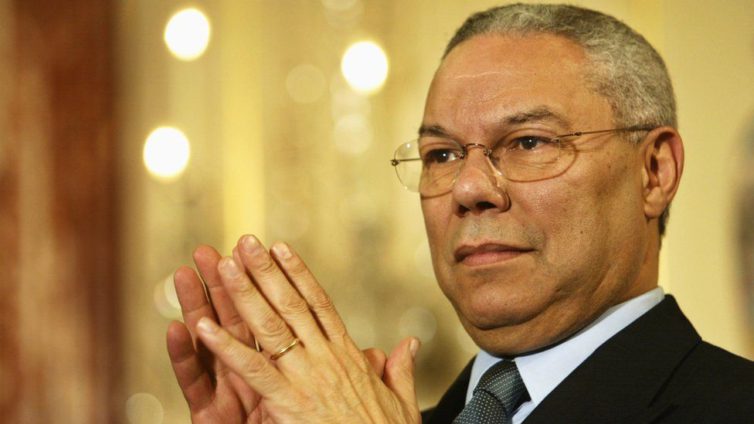 Colin Powell came from a humble background to become the first African-American US secretary of state.

A highly decorated army officer, he saw service in Vietnam, an experience that later helped define his own military and political strategies.

He became a trusted military adviser to a number of leading US politicians. And, despite his own misgivings, he helped swing international opinion behind the 2003 invasion of Iraq.

His parents originally pronounced his name with a short “o” in the traditional English way, but he changed the pronunciation in honour of a US Army Air Corps pilot, Colin Kelly, who was killed shortly after Pearl Harbor.

He was, by his own admission, an average scholar who left high school with no positive career plans.

While studying geology at the City College of New York, he joined the Reserve Officers Training Corps (ROTC), a programme designed to identify future military leaders.

Powell later described it as one of the happiest experiences of his life. “I not only liked it,” he said later, “but I was pretty good at it.”

After graduation in 1958, he was commissioned as a second lieutenant in the US Army. He underwent basic training in Georgia, where his colour saw him refused service in bars and restaurants.

In 1962, he was one of thousands of advisers sent to South Vietnam by President Kennedy to bolster the local army against the threat from the communist North.

During his tour Powell was injured by stepping on a punji stick, a sharpened wooden stake hidden in the ground and used as a booby trap.

In 1968, he returned to Vietnam, receiving a decoration for bravery after surviving a helicopter crash in which he rescued three other soldiers from the burning wreckage.

He was assigned to investigate a letter from a serving soldier that reinforced allegations of a massacre at My Lai in March 1968, in which US soldiers killed hundreds of civilians, including children.

Powell’s conclusion, that “in direct refutation of this portrayal, relations between American soldiers and the Vietnamese people are excellent”, flew in the face of growing evidence of brutal treatment of civilians by US forces.

He was later accused of “whitewashing” the news of the massacre, details of which did not finally become public until 1970.

After returning from Vietnam, Powell obtained an MBA at Georgetown University in Washington before securing a prestigious White House Fellowship under President Richard Nixon.

Powell was now seen as a rising star. There was a period as a lieutenant-colonel in South Korea before a move to the Pentagon as a staff officer.

After a spell at an army college, he was promoted to brigadier-general and commanded the 101st Airborne Division before taking up an advisory role in government.

He worked for a time in the Carter administration and then became senior military aide to Caspar Weinberger, the Secretary of State for Defence appointed by the incoming president, Ronald Reagan.

In 1987, Powell became national security adviser. It was the time of US involvement in so-called “dirty wars” in South America, including backing for the contras, the right-wing paramilitaries in Nicaragua.

When George H.W. Bush entered office in 1989, Powell was appointed Chairman of the Joint Chiefs of Staff, the highest military position in the US Department of Defense.

At 52, he was the youngest officer ever to hold the post, and the first from an African-American background.

He faced an immediate crisis when the US invaded Panama in December 1989, toppling the dictator, General Noriega, a move strongly condemned by the United Nations.

The 1990 Gulf War saw the implementation of a strategy which was dubbed The Powell Doctrine. Essentially, Powell believed that it wasn’t until all diplomatic, political or economic means had failed that the US should resort to military force.

However, once military action was launched, then the maximum force necessary should be deployed to subdue the enemy quickly while minimising US casualties. There also had to be considerable public support.

Much of this thinking was rooted in a determination that the US would no longer find itself bogged down in a long, fruitless conflict as it had in Vietnam.

Powell initially opposed the use of force in the Gulf, against the wishes of the then Defence Secretary, Dick Cheney. However, operations Desert Storm and Desert Shield were a success and brought Powell’s name to an international audience.

Powell remained Chairman of the Joint Chiefs of Staff during the early months of the new Clinton presidency but he found it difficult to work alongside a more liberal administration.

He clashed with the new president over the issue of allowing gay people to join the military and Powell opposed, and had a public disagreement with Madeleine Albright, then US ambassador to the UN, over military intervention in Bosnia.

Powell firmly believed that only a threat to US interests justified a military response. “American GIs are not toy soldiers to be moved around on some global game board,” he said.

He left the army in 1993 and devoted time to writing his autobiography – it topped the New York Times best-seller list – and engaging in charity work.

Freed from his obligations as a serving officer, he began to involve himself in politics. With admirers in both main parties, he was touted as a vice-presidential nominee for both Democrats and Republicans before declaring himself for the latter in 1995.

There was talk of him standing against Bill Clinton in the 1996 presidential election, but Powell decided he lacked the passion for a political career.

In 2000, George W Bush appointed Powell as secretary of state, the post responsible for US relationships with foreign countries.

After the 9/11 attacks, Powell found himself up against hawks such as the Secretary of Defence, Donald Rumsfeld, who favoured US intervention, even without the support of other nations, in what became dubbed the “war on terror”.

Powell, sticking to his own doctrine, opposed US involvement in Iraq but, in an about-face, agreed to support Bush. His reputation as a man of integrity certainly helped persuade the United Nations of the case for war when he appeared before the Security Council in 2003.

Just 18 months later, with Saddam Hussein toppled, Powell admitted that intelligence suggesting the Iraqi dictator had possessed “weapons of mass destruction”, was almost certainly wrong. Shortly after he announced his resignation as secretary of state.

He remained outspoken on political issues, criticising the Bush administration on many fronts, including the treatment of detainees at Guantanamo Bay. In 2008 Powell endorsed Barack Obama for the US presidency.

It said much for Colin Powell’s diplomatic skills that he found allies on both sides of the political divide. A genial man, he was revered at the state department where he had a reputation for courtesy and an easy-going manner that belied the high office he held.

His great strength was a belief that coalition was preferable to confrontation. His rejection of the Rumsfeld strategy of unilateral intervention allowed the US to build a worldwide alliance in the war against terrorism.

“War should be the politics of last resort,” he once said. “And, when we go to war, we should have a purpose that our people understand and support.”