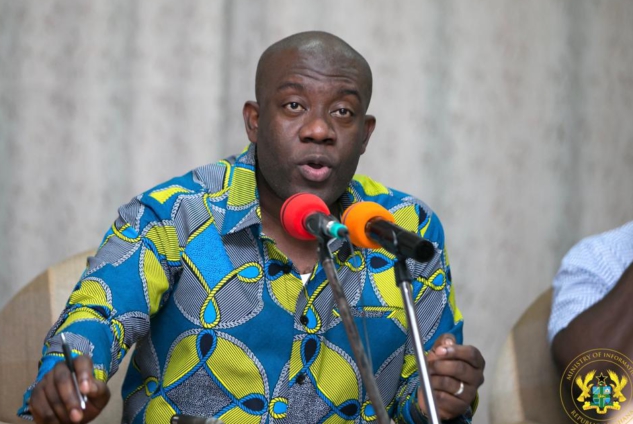 Information Minister, Kojo Oppong Nkrumah has asked Ghanaians to weigh the track records of the presidential candidates of the New Patriotic Party (NPP) and the opposition National Democratic Congress (NDC) in choosing the right manifesto.

He said Mr Mahama and the NDC had earlier raised doubts about the Free SHS policy invalidates his promise to halve the cost of tertiary education as stated in the biggest opposition party’s manifesto.

“From 2008 through to 2012, the former President opposed the state from providing free education for people at the Senior High School level consistently.

“Today, this same person is saying that he now believes in it and will now make tertiary education 50 per cent free, you have opportunity to ask yourself whether or not it sounds to anybody as a credible promise?” he said.

He further discredited the promise to give allowances to assembly members as promised in previous manifestos insisting the NDC’s inability to deliver on the promise and also offer basic logistics to them shows the promise is not credible.

“During his period, he run down the Ghanaian economy, went to the IMF for a bailout and as a result could not employ young people when they were graduating from school and today this person is promising to create a million jobs, Does it sound like a credible promise?”, he asked.

Mr Oppong Nkrumah addressing the media in Kumasi urged Ghanaians to list redeemed promises of both candidates as Presidents and draw distinctions.

He questioned the source of funding of the said projects when according to him, the NDC could not manage the economy effectively when in power.

“Mr Mahama told us they had chewed the meat down to the bone. Having seen how he has managed the economy if today he comes back and he says that the first pillar of his manifesto is to restore the economy and cure poverty, doe it sounds like a credible manifesto?”

On the legalisation of the “Okada” business, he observed that the laws to ban the business was made under the leadership of the former President and he can’t be trusted to go back on his decision.

Mr Oppong Nkrumah said despite the laws making the business illegal, the current government has been lenient in its enforcement

DISCLAIMER: The Views, Comments, Opinions, Contributions and Statements made by Readers and Contributors on this platform do not necessarily represent the views or policy of Multimedia Group Limited.
Tags:
Kojo Oppong Nkrumah
NDC and NPP manifestoes