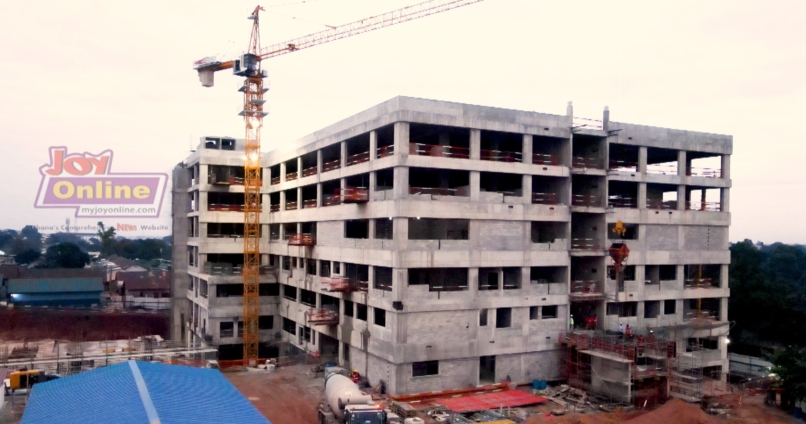 The first phase of the ongoing construction of the Maternity and Children’s Block at the Komfo Anokye Teaching Hospital is scheduled for completion in May 2024.

Work on the 507-bed capacity project started in February 2021, following the demolition of a 45-year-old building over structural integrity issues.

Health Minister, Kwaku Agyemang Manu, is excited at the progress and quality of work done, as contractors have assured of meeting deadlines.

He led a delegation from the Ministry to the project site.

“I am so excited about work so far done. It gives me a lot of hope and confidence that this project will finish within the contract duration period and I’m happy with the work so far,” Mr. Manu said.

The decision by the NPP government to construct a new maternity and children’s ward following several technical, architectural and structural tests on the old building suggested its structural integrity could not be guaranteed.

“The original idea was to rehabilitate that building but we found out structurally, it was not worth completing it.

We would’ve given ourselves death trap. So the idea came that let’s use the same quantum of money to do a new thing,” Nana Abu-Bonsrah, the Lead Consultant for Project Consultants, Arckito Consult explained.

The Ministry of Health awarded an engineering, procurement and construction contract to a UK-based company, Contracta, for construction of the new block.

Work on the new project started in February 2021 after the old block was demolished.

“This is a project that couldn’t have failed us. It’s right on the heart of the President and I have taken upon myself to deliver and so the President keeps on asking about how far.

That’s one of the reasons why I decided to come and see it myself,” Mr. Agyemang Manu added.

The 5-storey building to be equipped with modern theatres, paediatric neurology, haematology, cardio and respiratory wards, will provide a one-stop modern care for mothers, newborns and children.

Project Consultants, Arckito Consult, are optimistic of meeting the 2024 deadline.

Nana Abu-Bonsrah is the Lead Consultant.

“In fact the original thing we were expecting 750 beds and now under phase 1, we are doing about 500 beds and then there is a phase 2 which is going to be another tower block on top of the OPD which will match with this. 2024 May, we are sure of the completion.”

Health Minister, Kwaku Agyemang Manu, during the visit to the project site, expressed satisfaction on progress of work.

He says the relocation of a nearby basic school which forms part of some additions being considered will give more space for construction of an ambulance bay.

“There are few additions we may have to do. I have asked them to cost for us to see the cost implications. We want to do a basement for a car park, linking the new block to the old facility.

“We are going to relocate the schools here. We’ve got the approval for that so that we can build and fit a proper ambulance place to help the facility.”