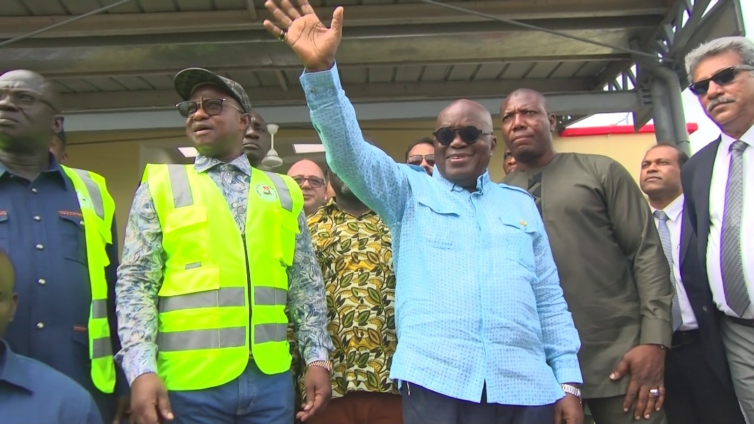 President Akufo-Addo has hinted that the quest to open up Ghana’s Volta Lake to connect businesses along the country’s border communities will become a reality soon.

This is coming after he inspected work on the railway bridge across the Volta River as part of the Tema-Mpakadan Railway project.

He believes this will be a major boost for both domestic tourism and trade along the eastern corridor route.

The bridge project which is part of the ongoing construction work on the Tema to Mpakadan Railway line is more than 98% completed.

President Akufo-Addo expressed confidence that carting of goods along the route will be easier.

The president earlier inspected the completed Afienya modern railway station which will be a starting point for the coaches.

After commissioning the road, President Akufo-Addo and the team inspected the rail bridge on the Volta Lake which is about 300 metres, and the first of its kind in the West African Sub region.

He also noted that the railway bridge over the Volta Lake will open up the area for business and international trade.

“When successfully completed, the project will link up the Tema port to the lake transport network especially the North-South movement over a distance of some 400 kilometres and open up the lake for the transportation of not only fuel and cement but containerized cargo and agricultural produce from the northern enclave and Afram Plains to the port of Tema and other destinations”, he mentioned.

The Minister for Railways Development,  John Peter Amewu, also hinted that the construction of a rail bridge over the Volta Lake which connects the Eastern region to the Volta region  will boost local economic growth and position the country as having one of the best infrastructure projects in the West African sub region.

The over 97 kilometres line from Tema to Mpakadan is however on schedule and will be handed over to government by March 2023.

DISCLAIMER: The Views, Comments, Opinions, Contributions and Statements made by Readers and Contributors on this platform do not necessarily represent the views or policy of Multimedia Group Limited.
Tags:
John Peter Amewu
President Akufo-Addo
Tema-Mpakadan railway project
Volta lake