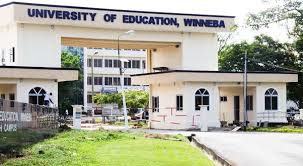 The Effutu Traditional Council, has called on authorities at the University of Education, Winneba, to smoke the peace pipe and ensure a smooth running of the institution.

This follows an order by a Winneba High Court for the reinstatement of some suspended officials of the University.

In a statement signed by the President of the Traditional Council, Neenyi Ghartey VII, the Council said it has taken note of the Court’s ruling on the longstanding impasse that has stained the reputation of the University.

According to the them, due to the prolonged conflict, Management of the University must take steps to end any dispute among the staff.

In view of past turbulences which affected the image of the school and by extension Winneba, we also entreat Council to put in measures that will ensure a manifest reconciliation for peace to reign without further rancour,” portions of the statement read.

It will be recalled that in 2017, the Vice Chancellor of the University of Education, Winneba, Prof. Mawutor Avoke was instructed to vacate his post until a case against him and the University Council by Supi Kofi Kwayera has been determined.

The plaintiff alleged financial and procurement irregularities on the part of Prof. Avoke. He also claimed that the University Council’s mandate expired in 2013; however, the Education Ministry failed to constitute a new Governing Council.

Based on these concerns, the University interdicted Prof. Avoke and four others after it emerged that some vital documents at some offices at the centre of an ongoing investigation had disappeared. The decision by the University’s Governing Council was described by many as politically motivated.

Later on, a Fact-finding Committee that was set up to look into the matter suggested the dismissal of the named University officers in August, 2018. The Governing Council of the University then appointed Rev. Fr. Professor Anthony Afful-Broni as the substantive Vice-Chancellor for a limited period of three years.

The four are the Finance Officer, Dr Theophilus Senyo Ackorlie, Daniel Tetteh, Mary Dzimey and Frank Owusu Boateng. It also ruled that their salary arrears must be paid from the date they were removed from their respective positions.

Following this development, President of the Effutu Traditional Council, Neenyi Ghartey VII, in his statement expressed his well wishes to the Vice Chancellor and urged him “to be a father of all in spite of all that has happened in the past.”