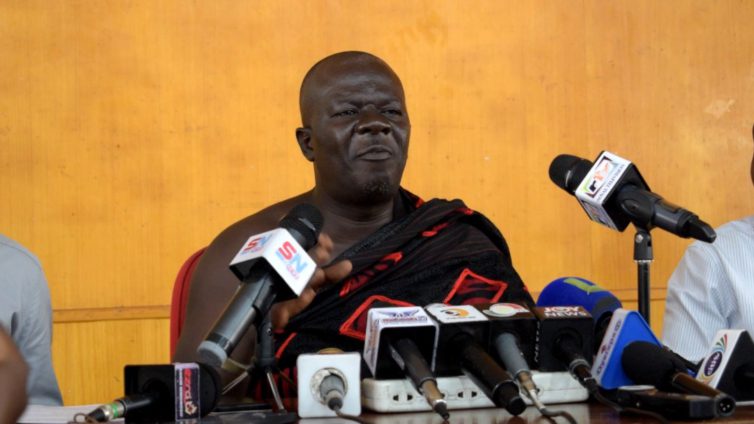 The Concerned Youth of Asante is requesting an explanation for the delay in the start of construction on the Boankra Inland Port project.

President Akufo-Addo cut sod on the Boankra Integrated Logistics Terminal in the Ashanti region in November 2020.
The project scheduled to commence in March 2021 is yet to start.

Leader of the group, Nana Agyenim Boateng explains the sod cutting is gradually turning to be politically inclined.

“In the run-up to the 2020 elections, President Akufo-Addo, in his desperation for re-election, purpoted to have cut sod for the commencement of the Boankra Inland Port and the 83km standard guage railway line in Kumasi to Obuasi”, Agyenim Boateng said to the press in Kumasi.

The President stated that financing for the project had been acquired, but eleven months later, there appears to be no progress.

Touring the Ashanti Region ahead of the 2020 General Election, President Akufo-Addo, joined by the Asantehene, Otumfuo Osei Tutu the second, cut sod for work to start on the Boankra project.

“Work is now set to begin after the conclusion of all financial, contractual, legal, parliamentary and regulatory matters and approvals. The project period is three years”, President Akufo-Addo said as he cut sod for the project on 6 November, 2020.

He added, “The transformation of the Ghanaian economy from a raw material producing and exporting one to industrialize one will be given a huge impetus with the coming on stream of this facility”.

The project is in partnership with the DSS Associates of Korea and Ghana’s Afum Quality Limited who will be investing 330 million dollars to complete the project in three years.

To ensure an effective transport system to drive the inland port project, key railway projects were expected to be constructed to link the facility to other parts of the country.

President Akufo-Addo during his recent tour of the Ashanti region admitted the delay when he paid a courtesy call on the Asantehene.

Meanwhile, the group is accusing the NPP government of neglecting the Ashanti Region despite the President’s assertion of increased investment in the region.

“It is unfortunate that President Akufo-Addo has nothing substantial to show for the 5 years he has been in office in the Ashanti Region which has largely been described as the political stronghold of the New Patriotic Party”, Nana Agyenim Boateng added.